Video: Storm Closes Schools in Wisconsin and Turns Off Lights in Kansas City

Snowed in and away from her husband on their 19th anniversary, military wife Martha Bond got out the pots and pans and fashioned a wedding cake out of the fresh snow that fell in her Andover, Kansas, yard, just outside of Wichita.

Her husband, Cliff Bond, is currently deployed. She texted him a photo.

"We had two weddings. We got married on February 26 and then the 5th of March, so this is marking the beginning of wedding week," she said. "I want to see if the cake will last that long without melting." 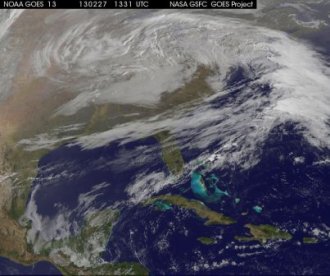 While residents in Kansas and other Plains and Midwest states still had tons of wet, heavy snow to clean up, and some remained without power, the storm that had socked some places with more than a foot of snow had moved on.

Chicago could see 3 more inches of snow Wednesday, forecasters said, for a total of 4 to 7 inches by the time the storm ends. In Milwaukee, Wisconsin, CNN affiliate WTMJ reported schools were closed amid a snowstorm that could bring drifts of up to 6 feet. Blowing snow could reduce visibility to a half mile at times, the National Weather Service said.

But the heaviest snow was expected in the White Mountains of New Hampshire, where up to 12 inches could fall, forecasters said.

The storm was making itself felt on air travel in the Northeast on Wednesday morning, where airports in New York, New Jersey and Philadelphia were all showing delays. At John F. Kennedy International Airport in New York, the FAA said departing flights were delayed by as much as an hour and 45 minutes and climbing.

Airlines called off about 150 flights routing through Chicago early Wednesday, down from the 1,000 canceled Tuesday.

"Take your time because this kind of snow they call heart-attack makers," he told CNN affiliate WLS-TV. "I mean, it will kill you."

Others left the shoveling for later, opting instead to break out the sleds.

"I love it," said John Harris, grinning from ear to ear in his Notre Dame stocking cap. "This is Chicago. This is what it should be like."

In Texas, some people had to resort to unconventional tools to get the job done. CNN iReporter Julie Swift of Plainview, Texas -- where 2 or 3 inches fell -- said she used a plastic school chair.

"The guy was shoveling next door for an older lady. I thought he had a real shovel," she said. "But he had a lid to a big plastic tub. That was funny."

The storm brought up to a foot of snow to parts of eastern Kansas, Missouri and Illinois a day after plastering southern Kansas, Oklahoma and Texas. It was the second major system to hit the area in two weeks.

In Shawnee, Kansas, the roof of a horse arena collapsed under the weight of snow Tuesday morning, CNN affiliate KSHB reported. It was one of several collapses in the region caused by snow, the station said.

No injuries were reported in those collapses, but a person died Monday in a roof collapse in hard-hit Woodward, Oklahoma, said Mayor Roscoe Hill.

Two other deaths came in Kansas on Monday in separate weather-related accidents on Interstate 70. One accident happened in Sherman County and the other in Ellis County, the Kansas National Guard said.

CNN's Christina Zdanowicz and Michael Pearson contributed to this report.