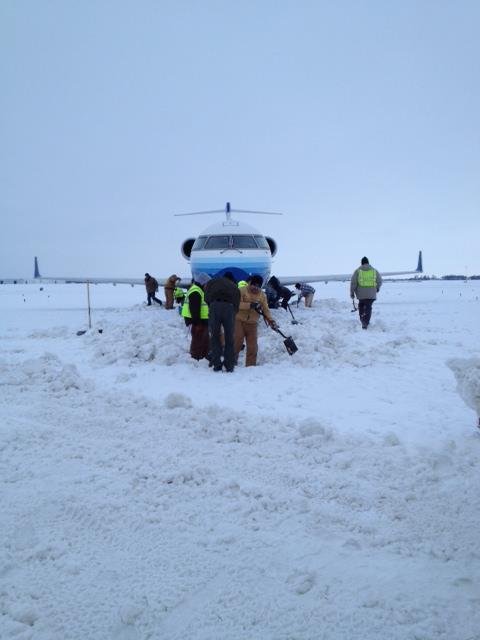 A winter storm that spanned 20 states and dumped record snow in parts of Kansas grew weaker as it marched toward the Northeast on Friday.  The snowstorm is expected to hit the Great Lakes region, according to the National Weather Service, dropping 4 to 7 inches of snow over Iowa and about an inch or so less over Chicago.

Over the weekend, the system should hover over New England, according to weather service forecast maps.

Duke the English bulldog has given new meaning to the word "dogsled."

His owner, Karen Blue, shot a video of the 75-pound pooch barreling down a slope near Kansas City, Missouri, on a bright red sled, barking all the way. He appeared to enjoy himself, and Blue got a warm chuckle out of it.

"He is obsessed with his sled," Blue wrote, when she posted the video to CNN's iReport on Thursday.

Bystanders let out whoops and cheers as the stocky fellow stepped off the sled when the ride was up. A man shouted: "He wants more!"

Kansas got the brunt of the snow as a winter storm moved past.

Some parts of the state saw even more snow, and Missouri was not far behind, with accumulations of around a foot in some places. Neighboring Nebraska got less snow than expected.

The snow set a record at Kansas City International Airport with 9 inches falling in a single day. The old record was 5.1 inches set in 2010. The airport closed down Thursday evening but reopened overnight.

Some businesses and universities shut down Thursday as state officials urged residents to stay off the roads.

The white blanket emptied out the streets of Kansas City.

Buses ran until 1 p.m. Thursday, but driving them wasn't easy, as some got stuck. One bus trying to negotiate a left turn on a snow-covered street fishtailed, swiping down a light pole on a sidewalk. The incident was caught on camera and made its way to CNN affiliate KMBC.  Bus service resumes Friday morning, and a handful of businesses have reopened, KMBC reported.

While causing mayhem elsewhere, the snowstorm turned out to be a welcome one to many Kansans and many others throughout the Great Plains who are suffering a drought.

This is the third straight year of severe drought in the nation's breadbasket -- affecting not just Kansas, but also Nebraska, Iowa, Missouri and a host of other farm-heavy states. The Kansas Department of Agriculture expects those conditions to continue into April, but near-record levels of snowfall will ease the problem and could accelerate the drought's end.

"It snows so infrequently here. Now we've been in a really bad drought for several years; really, really hot summer and just no moisture. So we're thrilled to see snow or ice -- whatever moisture we can get," Wichita resident Kristen Woodburn said.

Ranchers are embracing the storm, even though bitter cold snowstorms can be deadly during calving season.

Frank Harper, a Kansas rancher from Sedgwick and the immediate past president of the Kansas Livestock Association, said the storm did cause more work for him because he had to bring his calves inside throughout the day to warm them up.

"The saving grace is the temperature. It's not too cold tonight, so we should be in good shape," Harper said, adding that he hasn't lost any calves in the storm. He even called the snowstorm a blessing for bringing good moisture to the winter wheat.

The winter storm is part of a massive system that stretches down to the Gulf of Mexico, where it is drenching the coastline in subtropical downpours and has generated at least one confirmed tornado in Jefferson Davis, Mississippi.

The storm tore the roof off of a house in Clayton, Louisiana, according to the Sheriff's department, and damaged a second home. But the weather service has not reported a tornado there.

Flood warnings, watches and advisories line the system's path as it moves eastward, bringing rainfall from Louisiana to West Virginia.

The system is leaving behind much needed moisture in regions where precipitation has been rare lately.

"Big chunks of Nebraska, Kansas, Oklahoma and Texas" are facing exceptional drought, HLN meteorologist Bob Van Dillen said. "You squeeze out the water from the melting snow, and you're talking 1 to 2 inches of water for those dry regions."

And it has given desert regions near the border with Mexico a delightful spectacle.

"I've been here for over 10 years and I've never seen it snow like this," Kayla Avery of Tucson, Arizona, said in a CNN iReport Wednesday, which came with a video of the snowfall. She remembers playing in the snow as a child in Boston.

The storm left a thin layer of white powder on desert plants and palm trees.