Video: Obama Takes His Case on Sequestration to American People

President Barack Obama stepped pressure on Congress about the potential fallout from deep cuts in spending set to take effect on March 1, directing his emotional message squarely at the American people.

Flanked by first responders whose jobs could be affected if the initial wave of $85 billion in cuts for this year goes forward, Obama argued on Tuesday that such drastic austerity could add hundreds of thousands of people to the unemployment lines and hurt the economy.

"If Congress allows this meat cleaver approach to take place, it will jeopardize our military readiness, it will eviscerate job-creating investments in education and energy and medical research," the president said. "It won't consider whether we're cutting some bloated program that has outlived its usefulness or a vital service that Americans depend on every single day."

The campaign-style event at the White House auditorium with Congress out of town for a week was an attempt by Obama to amplify his message for averting the cuts, known in Washington jargon as sequestration.

His intention was to inspire public outrage at the potential new reality.

The forced cuts aimed at deficit-reduction have been hanging over Washington since 2011. They were initially proposed by the White House and then approved by Congress as part of a deal to allow continued borrowing by the Treasury to pay the nation's bills. 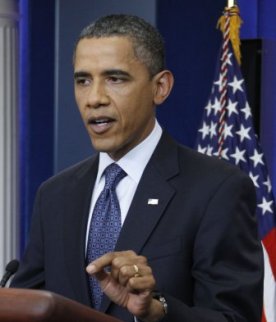 The deal established a bipartisan committee tasked with presenting a comprehensive deficit-reduction plan to Congress by that November. That group - dubbed the "super committee" - failed to reach any sort of agreement.

The "tough cuts" that were designed to be so objectionable were set to take effect this past January -- about $1 trillion over 10 years. Because that was also the date that the Bush-era tax cuts would expire, Federal Reserve Chairman Ben Bernanke dubbed the combination the "fiscal cliff."

The plan was to eventually negotiate a deal so the cuts would never be set in motion.

Heading out of the 2012 election and into this year and with no deal in sight, the cliff loomed large. The rhetoric was heated and the political maneuvering fierce.

Obama sought an agreement with congressional leadership and held events surrounded by middle class Americans, publicly announcing his desire for "a big deal."

But with a promise to increase taxes on wealthy Americans at the center of his re-election campaign, Obama focused most of his efforts on finding a tax compromise, rather than avoiding the looming spending cuts.

In an 11th-hour agreement on tax hikes for upper income Americans deferred the spending cuts for another two months. Now, that time is nearly up and Congress is no closer to a resolution.

Over the past several weeks, Obama called for a "balanced" approach to deficit reduction, one that includes tax reforms that increase government revenue.

He also appealed to Congress for a smaller package of austerity and tax reforms "that would delay the economically damaging effects of the sequester for a few more months" until lawmakers could find a "smarter solution."

Republican leaders insist any package must be comprised entirely of alternative spending reductions, including entitlement reform.

Just like he did on the tax issue around the fiscal cliff, Obama will step up his efforts to get Congress to act to avoid the sequester cuts, White House officials tell CNN.

The approach will mean more events like the one on Tuesday marked by emotional rhetoric and average Americans as backdrops. Obama plans to travel as well to highlight the impact of cuts on everyday Americans.