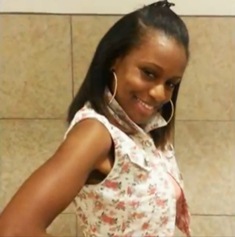 (CNN) -- Hours after her younger sister stood behind President Barack Obama during his gun violence speech last week, an Illinois teen died when a bullet found her in a North Chicago alley.

Two people were being questioned Monday as police worked to piece together the final moments of 18-year-old Janay McFarlane, who left behind a 3-month-old son.

McFarlane's younger sister, 14-year-old Destini Warren, was among a group of high school students standing behind Obama when he spoke in Chicago on Friday. Obama cited gun violence that killed 443 people in the city last year as one reason why children need community wide support to help them believe they can improve their lives through education and hard work.

Before the night had passed, McFarlane was dead and her family was plunged into mourning.

"I felt like someone took a knife and stabbed me in my heart and took a piece of my heart that I will never, ever in my life get back," Angela Blakely, McFarlane's mother, said Monday in an interview with CNN affiliate WLS.

"This just echoes what the president had said Friday... we have to get handguns off the street," North Chicago Mayor Leon Rockingham Jr. told CNN on Monday.

"We have more shootings than other communities and it's too much," he said. "Any time you have gunfire, it's too much."

The North Chicago Police Department and investigators with the Lake County State's attorney's office said community members led them to the two people being questioned Monday. The two might have knowledge about the homicide, authorities said.

Janay McFarlane's father said that despite gun violence in the community, his daughter's death by gunfire came as a shock.

"You never think that it will be your child," Herbert McFarlane told WLS Monday. "This is the hardest day for me in my life."