Biden Works the Phone, Hagel Nomination in the Breach Over Libya Questions 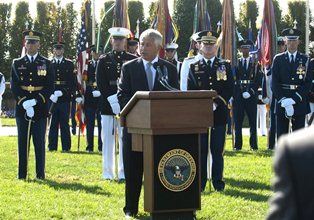 (CNN) -- In a sign the White House is scrambling to keep President Obama's defense secretary nominee afloat in the confirmation process, Vice President Joe Biden is making calls to Republican senators about former Sen. Chuck Hagel, according to a senior Democratic source.

This comes after the White House sent a letter to Capitol Hill stating that former Secretary of State Hillary Clinton called Libyan President Mohammed Magariaf the same night as the terror attack against a U.S. diplomatic post in Benghazi last year. President Obama, according to the letter, did not make a call to the Libyan president until the evening of the day following the violence.

The three GOP senators-Sens. Lindsey Graham, John McCain and Kelly Ayotte--had demanded answers about the attack in a letter Tuesday to the Obama administration before committing to vote on Hagel's nomination for defense secretary. Graham had publicly stated that he was specifically asking whether Obama called Libyan officials to help the night of the attack on the consulate in Benghazi.

Meanwhile, McCain told CNN Thursday morning that he had not yet seen the White House's letter.

The administration has been wary of responding--saying the GOP keeps moving goal posts--but the response is a sign they are losing patience and getting nervous about the Hagel nomination.

Hagel, who's battled his way through a rocky nomination process, faces an uncertain outcome during the Senate's critical vote on Friday, as Democrats attempt to break a potential GOP filibuster of the defense secretary nominee.

Doubts were raised Wednesday after McCain said he was reconsidering his pledge not to filibuster Hagel because the Obama administration was refusing to provide key details about the president's actions on the night of the attack in Libya.

Before seeing the White House letter, McCain would not say Thursday whether he would support or oppose a move Friday to end a filibuster of Hagel's nomination. Democrats say right now they do not have the 60 votes needed to overcome a filibuster. That could change if McCain is swayed by this letter.

Sen. Levin indicated that the trio of senators would be receiving a separate letter Thursday.

Senate Majority Leader Harry Reid took to the Senate floor on Thursday, building pressure on Republicans to back off of their threats. He added that the letter sent from the White House answers "all their questions."

"Now I'm told that the letter was sent to the chairman of the committee and that's not good enough," he said. "They want it sent to individual senators."

"This isn't a high school getting ready for a football game or some play that's being produced at the high school," he also said. "This is, we're trying to confirm somebody to run the defenses of our country, the military of our country."

Outgoing Defense Secretary Leon Panetta says he will remain in his position until a defense nominee is "sworn into office," a senior Pentagon official said Thursday.

A separate Democratic source, who has seen the White House letter, said the letter does answer the Republicans' questions, but it likely won't be enough to satisfy him.

Administration officials and Congressional Democrats said they were on the phone late into the night Wednesday discussing how to get Republican votes. The sources said the administration has been told they do not have enough GOP votes to gain the necessary 60 to stop a filibuster.

Should the uncertainty continue before Friday, some question whether Hagel would withdraw before the vote. But one senior administration official said that idea is "insane."

Referring to the GOP, the official said, "No one knows what they really want. There is nothing real to be had."

"They wanted testimony from (former Secretary of State) Hillary Rodham Clinton and Leon Panetta and they got it...there is nothing real to be had," the official continued.

The GOP, the source said, is taking an "unsustainable and suicidal position" and "if they want to have this fight, we will have it."

Asked Wednesday in a press conference whether the GOP was moving goal posts on the issue, Graham gave a firm "no."

"I'm gonna hit you, and keep hitting you," he vowed. "Absolutely. You're not going to get away without answering the basic questions. Did you make a phone call on September 11th to any Libyan government official using the weight and the voice of the president of the United States to help these people in their time of great need."

"It is difficult to explain to our allies why exactly that is happening. It also sends a signal to our men and women in uniform who are currently deployed around the world and who are currently serving in the frontlines of Afghanistan and are taking fire today," he told reporters. "They need a new secretary of defense. So we urge Republicans in the Senate to drop their delay."

CNN's Athena Jones and Ashley Killough contributed to this report.