Sen. Marco Rubio continued to poke fun at himself Wednesday morning after his now-famous sip of water made a big splash during his Republican response to the State of the Union.

Asked about the water on a morning news show, the junior senator from Florida reached over--out of the shot--to grab a water bottle and take a swig. 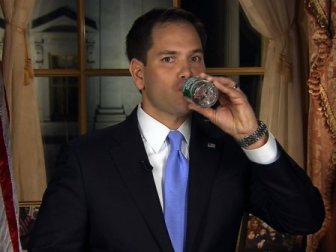 "I needed water. What am I going to do, you know?" he said on ABC's "Good Morning America."

"It happens," he continued. "God has a funny way of reminding us we're human."

Rubio could be seen wiping drips of sweat off his face a few times during his 15-minute response Tuesday night. Then at one point, he paused and lunged sideways--still looking at the camera--to grab a small bottle of water and take a sip.

The senator himself acknowledged the awkward break on Twitter afterwards, and the dry-mouth moment instantly went viral.

Rubio was asked on CBS' "This Morning" if he was nervous.

During speeches with podiums, he added, speakers normally have some water right there in front of them.

"When you're standing up in front of a camera, you don't have that option," he said. "It had been a long day at work. I already taped an 18-minute speech in Spanish, so I'm just glad the water was nearby, I don't know what I would have done without it."