State of the Union to Focus on Jobs, Wages and the Economy 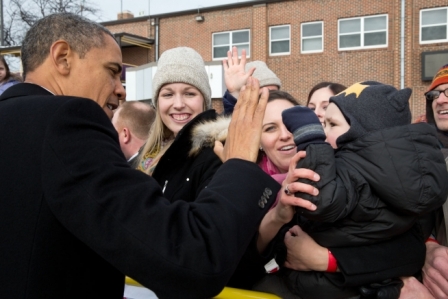 WASHINGTON (CNN) -- When President Barack Obama delivers the first State of the Union address of his second term Tuesday, he'll return to the topic that's proven to be the most lasting dilemma of his presidency: jobs and the economy.

While the president laid out social issues such as immigration, gun control and gay rights as key priorities for his second term during his inauguration address, the issue of the economy -- and the millions of Americans still out of work -- will remain his focus during the State of the Union, according to multiple administration officials.

Obama will outline new policies to create more jobs, help Americans get better wages and improve the health of the economy, the officials said, while also including proposals for new investment in clean energy, infrastructure, manufacturing and education.

The officials said the speech will lay out a roadmap for "expanding opportunity for the middle class" and ensuring prosperity reaches more Americans.

That largely mirrors what Obama has spoken about during his previous State of the Union addresses, a reflection of the persistent concern many Americans have with the state of the economy. Public opinion polls show jobs and the economy continue to be Americans' No. 1 issue, and last year's presidential election was largely focused on the country's financial health.

Although unemployment is down since Obama first took office in 2009, the current rate of 7.9 percent is higher than either the White House or Republicans deem acceptable. Many Americans have also stopped looking for work altogether.

When he first addressed Congress in 2009, Obama said "the state of our economy is a concern that rises above all others," and he'll note that though the country is not in crisis, the economy is still fragile. He'll warn members of Congress that ongoing battles over debt and spending threaten to derail the country's economic growth, an admonition that he has voiced previously.

He'll also call for tax reform and push for a "big deal" on reducing the federal debt, meaning a plan that balances cuts and revenue. That echoes what he told House Democrats at their retreat earlier this week, when he said he was "prepared, eager and anxious to do a big deal, a big package that ends this governance by crisis where every two weeks or every two months or every six months we are threatening this hard-won recovery."

The focus on the economy comes as major legislation looms on gun control and comprehensive immigration reform, two topics that Obama discussed in his inauguration address but that didn't play large roles during his first term.

One official who asked not to be named said that during his State of the Union, the president will not be confrontational with Republicans on immigration.

And on guns, the president will renew his support for the proposals he's already endorsed -- including a ban on military-style assault weapons and bolstering background checks -- and will call for quick action on passing those measures through Congress.

Because the president has already laid out the details of his guns proposal and is letting Congress present legislation first on immigration, the official said not to expect Obama to break new ground in these areas during his speech Tuesday.

He will address the ongoing drawdown of the American military presence in Afghanistan, and last week Vice President Joe Biden indicated at a security conference in Munich that Obama could talk about his commitment to reducing the stockpile of nuclear weapons around the world.

"It will reflect our shared interests in the following areas: advancing a comprehensive nuclear agenda to strengthen the nonproliferation regime, reduce global stockpiles and secure nuclear materials," Biden said.

Confirmation hearings for Obama's nominees to become defense secretary and CIA director have also raised issues that appear to demand the president's acknowledgment, including how to keep the country safe with pending budget cuts at the Department of Defense, flashpoints in the Middle East and new war technologies, namely drones.

Aides say he will touch on many of those issues.

Cody Keenan is running the speechwriting process. Keenan, a Massachusetts native who also worked for the late Sen. Ted Kennedy, will take over from Jon Favreau as Obama's chief speechwriter at the end of the month. Among the speeches he has worked on in the past are eulogies for Kennedy, the victims of the Arizona shooting that injured former U.S. Rep. Gabby Giffords and the victims of the Sandy Hook Elementary School shooting.

Republicans are already criticizing the president for asserting he's pivoting to focus on jobs. On Sunday the conservative super PAC American Crossroads sent reporters a video splicing together administration officials talking about turning to economic recovery and job growth -- a video they first released before the president proposed the American Jobs Act in 2011.