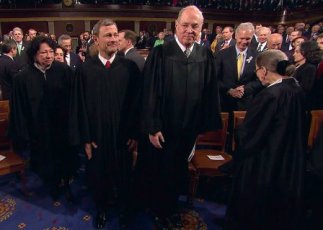 One member of the esteemed group feels like a "proverbial potted plant," while another resents sitting there "looking stupid." Their chief ponders the pageantry and politics of it all and wonders why they bother to go.

For members of the Supreme Court, enduring the State of the Union address is a civic exercise in poker-faced discretion. As recent history has shown, that is not always easy.

Tuesday's speech in the House chamber by President Barack Obama will be watched closely not only for what is said about his second-term agenda, but also for who will be there in person to hear it.

Court members are not required by law to be there, but custom has dictated their appearance in their robes, mostly for show.

They are low-key part of the pageantry and are compelled to sit politely and stoically amid the often high-spirited partisan rhetoric and response of the event.

There is no word yet from the high court about who appear. Invitations are sent to each chamber and the justices have individual discretion whether to attend. Usually one or more do.

Justices Stephen Breyer and Anthony Kennedy have been regulars.

Government sources say Justice Sonia Sotomayor, who joined the bench in 2009, is expected to be there. So, too, Justice Elena Kagan. Obama nominated both.

The political embers were stoked three years ago when Obama went after high court conservatives during the speech.

"With all due deference to the separation of powers," Obama said, "the Supreme Court reversed a century of law to open the floodgates for special interests, including foreign corporations, to spend without limit in our elections."

Sitting just feet away in the audience, Samuel Alito shook his head and mouthed words interpreted as "not true," referring to the line about "foreign corporations," court sources later confirmed.

Alito's five fellow justices with him that night showed no emotion.

Chief Justice John Roberts labeled the political atmosphere at the 2010 address "very troubling" and said partisan rhetoric and gestures aimed at the court left him questioning whether his colleagues should attend.

"It does cause me to think whether or not it makes sense for us to be there" Roberts said weeks after the controversy. "To the extent the State of the Union has degenerated into a political pep rally, I'm not sure why we're there."

Regardless, Roberts has never missed a State of the Union as chief justice and is expected to be there next week.

His predecessor, Chief Justice William Rehnquist, rarely appeared in person. On one occasion, he considered a painting class more preferable.

Some current justices have been no shows regularly or at times.

Alito had been a regular, but he told an audience after the 2010 event that he felt "like the proverbial potted plant" and would not be attending in the near future.

Justice Clarence Thomas called it "very uncomfortable for a judge to sit there." He went to Obama's first in 2009, but has not been back since.

"There's a lot that you don't hear on TV," he said recently. "The cat-calls, the whooping, hollering, and under-the breath comments."

Another more vocal no-go is Justice Antonin Scalia, who has compared the televised State of the Union to "cheerleading sessions."

"You just sit there, looking stupid," he said, calling the event and the spasms of partisan applause a spectacle.

"I resent being called upon to give it dignity."