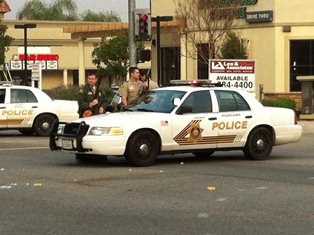 LOS ANGELES (CNN) -- A former Los Angeles cop who had allegedly warned he would target law enforcement in retribution for being fired is now suspected of shooting three officers early Thursday, killing one, authorities said.

The shootings -- which come a day after Irvine, California, police named Christopher Jordan Dorner as the suspect in a double slaying there Sunday -- sparked a huge manhunt in Southern California.

The California Highway Patrol issued an alert Thursday morning urging officers in several Southern California counties to be on the lookout for the onetime officer and Navy lieutenant.

The manhunt stretched from Los Angeles all the way to San Diego, where police said the attempted hijacking of a boat could be linked to Dorner, CNN affiliate KFMB reported. The station said Dorner's police badge had also been found in the city. He worked for the LAPD from 2005 until 2008.

Multiple law enforcement agencies linked Dorner, 33, to the shooting of two Riverside police officers in an ambush at an intersection around 1:30 a.m. One officer died. Police learned of the shooting when a Good Samaritan picked up a police radio and made a distress call on behalf of the wounded officers, Riverside police said.

About an hour earlier, police believe Dorner shot and slightly wounded a Los Angeles police officer assigned to protect officers who he allegedly threatened in a lengthy letter complaining of his treatment by the Los Angeles Police Department, according to LAPD Officer Tenesha Dobine. That shooting took place in Corona, California, early Thursday as the officer was exiting the freeway in that Riverside County town, according to Los Angeles police.

In addition to Thursday's shootings, Dorner is suspected of the February 3 deaths of Monica Quan and her fiance Keith Lawrence in Irvine, according to police there.

In his letter, which was provided to CNN by an LAPD source, Dorner said Randal Quan handled the appeal of his termination and bungled it. Dorner appealed the case to a Los Angeles court, where a judge ruled against him in 2011, according to court records.

Dorner threatened Quan and his family as well as several other LAPD figures, and said his treatment at the agency's hands had ruined his life.

"I never had the opportunity to have a family of my own, I'm terminating yours," Dorner allegedly wrote, according to the document provided by the source.

The letter writer warned the officers to "look your wives/husbands and surviving children directly in the face and tell them the truth as to why your children are dead."

According to the letter, Dorner also threatened to use his Navy training against additional police officers who he said were involved in a continuing culture of racism and misconduct in the department.

"I will bring unconventional and asymmetrical warfare to those in LAPD uniform whether on or off duty," Dorner allegedly wrote. in a lengthy letter promising retribution against the department, where he worked from 2005 until 2008.

The letter writer claimed he was terminated after he reported excessive force by a fellow officer. He said the attacks were "a necessary evil that I do not enjoy but must partake and complete for substantial change to occur within the LAPD and reclaim my name."

In Riverside, police sealed off intersections in the downtown neighborhood where the two officers had been shot. Police, some of them in SWAT gear, carried assault rifles on their shoulders, their fingers on the trigger guards.

Los Angeles police warned people who encounter Dorner not to approach him, saying he is likely "armed and extremely dangerous."

"Our department is implementing all measures possible to ensure the safety of our LAPD personnel, their families and the Los Angeles community, and will continue to do so until Dorner is apprehended and all threats have been abated," police said in a statement.

Dorner is a former U.S. Navy Reserve lieutenant who worked with river warfare units and a mobile inshore undersea warfare unit, among other assignments, according to Pentagon records obtained by CNN. He also provided security on oil platforms in Iraq.

He was rated as a rifle marksman and pistol expert, according to the records.

His last day in the Navy was February 1, according to the records.