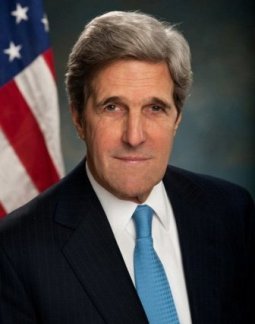 Secretary of State John Kerry will highlight the priority of protecting diplomats overseas during his ceremonial swearing-in on Wednesday.

The safety of America's diplomats has been scrutinized since Ambassador Christopher Stevens and three other Americans were killed in a terror attack on the U.S. mission in Benghazi, Libya, last September.

"This will be front and center as we move forward," agency spokeswoman Victoria Nuland said.

Kerry will take the ceremonial oath at the State Department. He was officially sworn in last Friday.

To underscore the focus, Kerry visited the State Department's Diplomatic Security Command Center in Rosslyn, Virginia, on his first full day in the job on Monday.

Touring the center that monitors security at America's 275 diplomatic missions, he was briefed on the operation and pledged to provide the resources necessary to ensure the highest level of security.

Earlier that morning, he was greeted by staff in the cavernous entrance to the State Department.

"I guarantee you that, beginning this morning when I report for duty upstairs, everything I do will be focused on the security and safety of our people," he said.

Administration critics question why there was not more protection at the diplomatic post in Benghazi when it came under armed assault, while supporters blame Congress for not providing enough money for security.

An independent review of the attack cited serious lapses in management and leadership by the State Department, but also called on Congress to provide more resources.

Kerry's predecessor, Hillary Clinton, made implementing the recommendations of the independent review one of her last official acts.

The Senate passed legislation on Monday allowing the State Department to use $1.1 billion in funds that had previously been approved for Iraq to boost security at U.S. embassies around the world. The bill now goes to the House.

Nuland told reporters on Tuesday that the agency is "gratified" by move. The money, she said, would be used to improve construction for diplomatic security, to support 35 more Marine security guard detachments, and to implement additional measures.

The State Department already was making security upgrades there and Nuland told reporters those improvements were key to minimizing casualties.

One security guard was killed in the attack and other guards standing behind a reinforced glass window were shaken up, she said.

Moreover, security measures prevented the suicide bomber from entering the grounds. He detonated his explosives at an exterior check point.