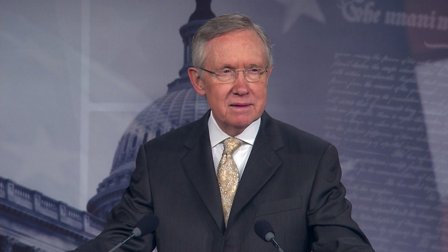 The Senate's top Democrat pointed to measures that Republicans previously supported, such as closing tax loopholes and eliminating oil subsidies, as potential options.

"We need to keep our eye on the prize and continue doing something about spending, but I think that what we need to do is do some of the things that Mitt Romney talked about. He said there's some low-hanging fruit; there are a lot of tax loopholes that should be closed. I agree with him. We haven't done that," Reid said on ABC's "This Week."

His comments come after Republicans have said they've compromised enough on taxes and are done with the revenue side of the budget equation, saying the upcoming fiscal battles should be focused on how to limit spending instead. Congress approved a bill this year that raised taxes on the very wealthy.

"The moment that (Obama) and virtually every elected Democrat in Washington signed off on the terms of the current arrangement, it was the last word on taxes. That debate is over," Senate Minority Leader Mitch McConnell wrote in an op-ed earlier in early January, shortly after the fiscal cliff bill passed.

But Reid said "the American people are on our side."

"The American people don't believe in these austere things. We believe that the rich should contribute. We believe we should fill those tax loopholes, get rid of them, I should say. And that's where we need to go," he said.

He added that "without question," Congress will have to agree on new sources of revenue in order to avert the sequester, a series of automatic, across-the-board spending cuts set to begin in about a month if lawmakers fail to act.

His comments foreshadow what's expected to be more Washington gridlock, as Republicans and Democrats fight to resolve the sequester issue and struggle over looming votes on funding the government and raising the debt ceiling later this year.

On "This Week," Reid gave his take on the challenges facing the 113th Congress, including overhauling immigration laws and gun control.

Both issues have emerged as priorities for Senate Democrats. "I definitely want to do something with immigration for sure and I want to get something done on guns," Reid said in the interview.

Reid is a longtime supporter of gun rights, with ties to the National Rifle Association, but he has alluded to a change in his attitude toward gun control in the aftermath of last year's mass shootings in Newtown, Connecticut, and Aurora, Colorado. His changing stance has left some wondering what position he will take on gun control legislation if it comes up for a vote in the Senate.

Asked whether he would vote for a ban on assault weapons - a ban he has voted against in the past - the majority leader said previous measures "didn't make sense." However, referring to Newtown, he said "to see those little babies on the ground - one little girl, 5 years old, shot more than ten times - of course that breaks your heart, and I am willing to take a look at it."

While his stance on the assault weapons ban remains unclear, Reid said he would support additional background checks and anti-trafficking regulations.

He also expects the Senate Judiciary Committee to produce a gun control bill following regular procedure, to which senators would be able to bring up amendments.

Reid took a stronger stance on revamping immigration laws in the interview, saying that comprehensive reform would have to include increased border security as well as a pathway to legalization for undocumented immigrants. Earlier this week, a group of bipartisan senators outlined its own framework for a comprehensive plan that includes similar proposals.

Reid criticized some Republicans for "looking for excuses" not to vote for reform, for instance, insisting that the bill exclude the families of gay immigrants in family preference cases.

"If we have gay folks in this country who have children or they come from some other place, they should be protected, just like any other child," Reid said.

Reid also spoke of the demographic changes he's seen in his home state of Nevada in recent decades. "I've seen the (supporters of the DREAM Act) come to me and explain to me, 'We're Americans. We've known, we know no other country.' My heart says we have to do this," he said.