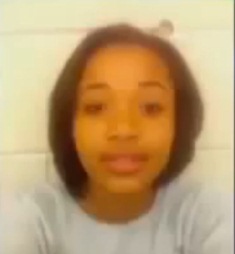 CHICAGO (CNN) -- The family of a Chicago teenager killed just a week after she performed in President Barack Obama's inauguration supports using her death to help shape the debate over gun control, her father and godfather said Thursday.

Pendleton, 15, an honor student and band majorette at Kings College Prep School, died Tuesday after a gunman shot her at a park in what her godfather, Damon Stuart, described as an "ideal community" on Chicago's South Side.

Police have told CNN affiliates that the teenager had no gang affiliation and likely was not the intended target.

The issue quickly entered the national discussion over gun control, with White House spokesman Jay Carney referring to it in his daily press briefing and the issue coming up Wednesday in a Senate Judiciary Committee hearing on gun violence.

"Yesterday, in a rainstorm after school, she raced to a shelter. A gunman came in and shot her dead," he said during the hearing. "Just a matter of days after the happiest day of her life, she's gone."

Hadiya's father said she had been ecstatic to participate in the inaugural festivities.

"It was one of the great things, she was so excited," Nathaniel Pendleton said. "She had been talking about it way before the inauguration, way before the election."

The year has gotten off to a deadly start in Chicago -- Hadiya Pendleton was the 42nd murder victim of 2013. No arrests have been made in the case.

Chicago Mayor Rahm Emanuel described the teenager Wednesday as "what's best in our city, a child going to school who takes a final exam, who had just been to the inaugural."

"We have a responsibility to see a stop to this," he said. "And all of us are responsible."

Carney said the president and first lady's thoughts and prayers are with Hadiya Pendleton's family.

"And as the president said, we will never be able to eradicate every act of evil in this country," Carney said, "but if we can save even one child's life, we have an obligation to try when it comes to the scourge of gun violence."