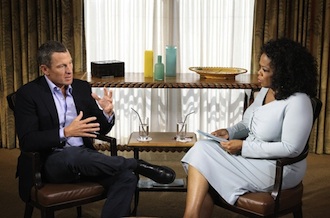 After years of tenacious spin that he was innocent, Lance Armstrong has backpedaled in a confessional interview with Oprah Winfrey.He admitted unequivocally to using performance-enhancing drugs in his seven Tour de France wins.

But his critics say he is still spinning the story.

Armstrong has, in the past, persistently and angrily denied the allegations -- even under oath.

And he has persecuted former close associates who went public against him. "We sued so many people," Armstrong told Winfrey -- people who were telling the truth.

Did he use the blood-enhancing hormone EPO? Testosterone? Cortisone? Human growth hormone? Illegal blood transfusions and other blood doping?

Armstrong answered "yes" on all counts in the first installment of a two-part interview that aired Thursday night. Part two airs Friday on Winfrey's OWN channel and online.

The disgraced cyclist, who has been stripped of his Tour de France titles and an Olympic bronze medal, blamed no one but himself for his doping decisions, careful not to implicate others.

Armstrong: I was 'a bully'

Armstrong described himself as "deeply flawed" and "arrogant," and spoke often of how so much was his "fault."

"I was a bully," he told Winfrey of how he treated others who might expose him.

But Armstrong was not telling the whole story, author David Coyle, who wrote a book about doping and the Tour de France, told CNN's Anderson Cooper on Thursday night.

"A partial confession is sort of the pattern here," he said. "Maybe this is Armstrong's partial, and more will come out later."

"Tyler Hamilton gets a phone call: Be on a plane tomorrow. We're flying to Valencia to do a blood transfusion. That's what happens," Coyle said.

Armstrong told Winfrey that doping was widespread at the time and just as much "part of the job" as water bottles and tire pumps. This attitude prompted Winfrey to ask again if he really didn't coerce other teammates to dope.

Bill Strickland, an editor for Bicycling Magazine, praised Armstrong for the confessions he did make.

"I think it's clear what we're seeing here is someone learning to tell the truth," he said.

Both men described the interview as a "therapy session."

Appearing tense but sometimes cathartic, Armstrong told Winfrey it was a happy day for him to be there with her.

He described his years of denial as "one big lie that I repeated a lot of times." He had races to win and a fairy tale image to keep up.

Armstrong reminisced on his storied past of being a hero who overcame cancer, winning the Tour repeatedly, having a happy marriage, children. "It's just this mythic, perfect story, and it isn't true," he said.

It was impossible to live up to it, he said, and it fell apart.

The lies and aggressive pursuit of those debunking them was about controlling the narrative. "If I didn't like what somebody said ... I tried to control that and said that's a lie; they're liars," Armstrong said. It's a tactic he has followed his entire life, he said.

"Now the story is so bad and so toxic, and a lot of it is true," Armstrong said.

The U.S. Anti-Doping Agency, which tests Olympic athletes for performance-enhancing drugs, said the interview was a "small step in the right direction."

But it seemed to share Coyle's skepticism about whether Armstrong was exposing the whole truth.

"If he is sincere in his desire to correct his past mistakes, he will testify under oath about the full extent of his doping activities," USADA CEO Travis Tygart said.

The International Olympic Committee called it a sad day for the sport, and likewise called for Armstrong to "present all the evidence he has to the appropriate anti-doping authorities so that we can bring an end to this dark episode and move forward, stronger and cleaner."

The International Cycling Union called it "disturbing" to see Armstrong's confessions, but it said the sport is much different today than it was 10 years ago.

"Lance Armstrong's decision finally to confront his past is an important step forward on the long road to repairing the damage that has been caused to cycling and to restoring confidence in the sport," union president Pat McQuaid said.

Years of success and defiance, then a rapid fall

The scandal has tarred the Livestrong cancer charity that Armstrong founded and blown his endorsement deals.

Those who suffered for speaking out now feel vindicated.

They include Betsy Andreu, wife of fellow cyclist Frankie Andreu, who said she overheard Armstrong acknowledge to a doctor treating him for cancer in 1996 that he had used performance-enhancing drugs.

"This was a guy who used to be my friend, who decimated me," Andreu told CNN's Anderson Cooper on Thursday night. "He could have come clean. He owed it to me. He owes it to the sport that he destroyed."

The former athletic icon conceded he'd let down many fans "who believed in me and supported me."

"I will spend the rest of my life ... trying to earn back trust and apologize to people."

After winning various legs of the Tour de France, Armstrong's sporting career ground to a halt in 1996, when he was diagnosed with cancer. He was 25.

He told Winfrey that he then developed a "ruthless and relentless" attitude that helped him survive. But he carried it with him into his sports career, "and that's bad," he said.

He returned to the cycling world, however. His breakthrough came in 1999, and he didn't stop as he reeled off seven straight wins in his sport's most prestigious race. Allegations of doping began during this time, as did Armstrong's vehement defiance.

Armstrong still insists he was clean when he finished third that year, but that comeback led to his downfall.

"We wouldn't be sitting here if I didn't come back," he told Winfrey.

In 2011, Armstrong retired once more from cycling. But his fight to maintain his clean reputation continued. Federal prosecutors launched a criminal investigation, but it was dropped in February.

In April, the USADA notified Armstrong of an investigation into new doping charges. In response, the cyclist accused the organization of trying to "dredge up discredited" allegations and filed a lawsuit in federal court trying to halt the case.

The USADA found "overwhelming" evidence that Armstrong was involved in "the most sophisticated, professionalized and successful doping program."

Armstrong objected to the claim to Winfrey, saying that although it was "professional," it did not compare to doping programs in former communist East Germany.

Armstrong told Winfrey that the unraveling of his career is the second time in his life that he could not control his life's narrative -- the last time was when he had cancer.