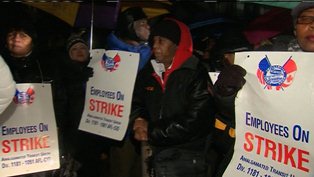 NEW YORK (CNN) -- For the first time since 1979, New York City school bus drivers went on strike Wednesday -- a protest that is affecting more than 150,000 students.

As of 6 a.m. Wednesday, about 8,800 bus drivers walked off the job after city and union officials failed to reach an agreement, according to a spokeswoman for Local 1811 of the Amalgamated Transit Union.

Bus drivers are demanding job security through what is called Employee Protection Provisions (EPP). The provisions assure that senior bus drivers and matrons will get priority over newcomers. They also protect wages and pensions, according to the union.

Mayor Michael Bloomberg denounced the strike, saying the union is "seeking protections that aren't provided in any other school districts in the nation" and that members want "job guarantees that they just can't have."

The impasse comes after Bloomberg, in a bid to cut costs, put out bids for nearly 1,100 bus routes currently handled by Local 1181 drivers.

Last year, the city bid out contracts for preschool bus routes, and the new contracts will save taxpayers $95 million over five years.

Strikers picketed Wednesday at 30 locations around the city's five boroughs.

"It's unfortunate that those that are hurt most by the mayor's actions and the chancellor's actions are the city's most vulnerable schoolchildren and their parents," ATU Local 1181 President Michael Cordiello said outside a Queens bus depot where several dozen bus drivers and matrons picketed

The school system has 1.1 million students.

"[The city's] job is to get the lower price we can to get the jobs that we need to get done," Bloomberg said, adding that the city does not employ the members of the union. "Employees that are striking have to resolve their issues with the bus companies that employ them, not us."

Cordiello said, "Despite public pronouncements, it is not illegal to put the EPP in the bids."

Frustrated union members blasted the mayor's approach to the negotiations.

"This is the reason why the EPP was put back in the day --- it was to ensure that when we're behind the wheels, and the matrons, they're professionals---they're well-trained. But what the mayor wants to do now is pay people low wages. And what you paid is what you're going to get," said Edwin Beniquez, a bus driver of 12 years.

The city made contingency plans for the strike, with schools handing out transit cards for both parents and students, and also reimbursements for any personal vehicle use or car service expenses, according to the Office of Pupil Transportation.

"It throws my day off about an hour," mom Karima Johnson told CNN affiliate WABC-TV. "So I'll be going to work a little bit late because I have to take her to school."

According to preliminary data, attendance for the day was 1% below the average for the rest of the month, Department of Education spokeswoman Erin Hughes said.