Video: Conspiracy Theorist Threatens Insurrection If \"you Try to Take Our Firearms\" 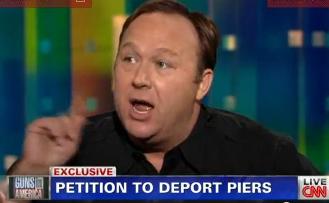 Bankers pull the strings on world governments to solidify their power. Companies are harming you and ducking responsibility. Antidepressants are "suicide mass murder pills." President Barack Obama is using drones against Americans.

And the collapse of the World Trade Center towers on September 11, 2001, was engineered by the government.

Now, he's attacking CNN host Piers Morgan, depicting the British native of being a "red coat" out to step on Americans' rights and calling for his deportation.

In recent segments on Morgan's show, Jones accused him of wanting to take Americans' guns, hurling insults at Morgan in between shouted arguments.

"You're a hatchet man of the new world order. You're a hatchet man," Jones told Morgan on Monday. "And I want to say this right here, you think you're a tough guy? Have me back with a boxing ring in here, and I'll wear red, white, and blue, and you can wear your jolly roger."

It's just all in a day's work for Jones, who simply sees himself as a bulwark against efforts by everyone from the Gates Foundation -- run by Microsoft founder Bill Gates -- to conservative talk radio host Rush Limbaugh to undermine the free world.

Rolling Stone once called him "the most paranoid man in America."

In a commentary on his website, Jones objected to the use of the word "paranoid," but otherwise corroborated the accuracy of the Rolling Stones article, which described an extreme distrust of prominent world institutions, leaders and media figures.

Jones, who started out on one radio station in 1996, espouses his theories on a three-hour daily syndicated radio program he says is carried on 140 stations.

It also streams over the Internet and listeners also can dial in by phone.

Jones also appears as a guest on "Conspiracy Theory" with former Minnesota Gov. Jesse Ventura, as well as on Fox News, Russia Today and mainstream television networks and cable stations in the United States and Britain, according to his Genesis Communications biography.

He's cranked out more than 15 films, according to his website biography, all espousing predictions of a dire future. Titles warn of a coming "Police State," the impending "Fall of the Republic" and the undermining of American society by Obama -- who Jones says is paving the way for world dominance by corporations and banks.

He has also a YouTube channel and two websites -- PrisonPlanet.com is the other one -- but it nearly duplicates Infowars in format and content.

Jones' official biography on Infowars cites Thomas Jefferson and George Washington as influences and describes him as "a dedicated and aggressive Constitutionalist" defending the Bill of Rights.

That includes support for the Branch Davidian church, which gained notoriety during a 1993 shootout and ensuing 50-day standoff with federal agents in Waco, Texas.

Later, Jones led an effort to rebuild the church, according to his biography.

His aim with his radio show, website and films is to convince and warn, intensely.

In 2009, Psychology Today said Jones hand picks facts to drive home his theories. It posed the question: "When does incredulity become paranoia?"

"Information is the conspiracy theorists' weapon of choice because if there's one thing they all agree on, it's that all the rest of us have been brainwashed," writes psychologist John Gartner.

Their theories range from "suspicion to full-on paranoia," he writes, and they see arguments to the contrary by others as attempts to cover up the evidence.

Jones, of course, doesn't see it that way.

Arguments in favor of gun control, for instance, are nothing but blunt efforts to demolish democracy and usher in a new age of totalitarianism.

"They've taken everybody's guns but the Swiss and the American people," he told Morgan Monday. "And when they get our guns, they can have their world tyranny while the government buys 1.6 billion bullets, armored vehicles, tanks, helicopters, predator drones, armed now in U.S. skies, being used to arrest people in North Dakota."