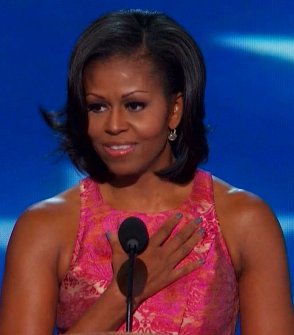 But the president's wife, first lady Michelle Obama, still gets high marks as she prepares for another four years in the White House alongside the president.

Seventy-three percent of Americans approved of the way Michelle Obama was handling her job as first lady, compared to 20 percent who disapproved. Among the causes the first lady has championed since 2008 is the "Let's Move!" program, designed to combat childhood obesity by encouraging healthier eating habits and exercise.

Clinton is on her way out as the nation's top diplomat, a move she has long planned. While many speculate she's considering a run for the Democratic presidential nomination in 2016, she has consistently claimed she's out of politics for good, and will use her post-State Department life to relax.

Last week Obama nominated U.S. Sen. John Kerry of Massachusetts to succeed Clinton, and Kerry is expected to be confirmed easily by his colleagues in the Senate.

Another Cabinet member, Treasury Secretary Tim Geithner, received lower marks in the CNN poll released Wednesday. Thirty-six percent of respondents approved of the job Geithner is doing at the Treasury, compared with 42 percent who disapproved and 21 percent who were unsure.

Most recently, Geithner had been tasked with negotiating with congressional Republicans on a solution to the year-end fiscal cliff, a package of tax increases and spending cuts that will automatically trigger if a deal to cut the federal deficit isn't struck. No deal currently appears to be on the horizon.

Geithner has also been a crucial adviser to the president on global economic woes, U.S. recovery from recession, the auto bailout, and efforts to toughen Wall Street regulation and deal with shaky credit and housing markets.

Like Clinton, Geithner has said that he would step down for a second Obama term, but not before the fiscal cliff crisis is resolved. Potential successors at Treasury include Obama's current chief of staff, Jack Lew.

The CNN/ORC International poll was conducted with 620 Americans by telephone from December 17-18. The sampling error was plus or minus four percentage points.