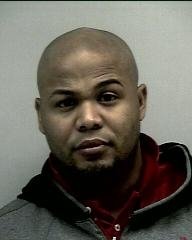 Former Major League outfielder Andruw Jones has been arrested and released on battery charges following a domestic dispute between him and his wife in suburban Atlanta early Christmas morning, authorities said.

Jones was booked into the Gwinnett County Detention Center northeast of Atlanta at 3:48 a.m. and he bonded out at 11 a.m., jail records show. His bond was set at $2,400.

Jones roamed the outfield for the Atlanta Braves from 1996-2007. In the 1996 at the age of 19, he homered in his first two World Series at-bats, becoming the youngest player ever to do so. Jones captured 10 consecutive Gold Glove Awards.

Since leaving the Braves, Jones has bounced between teams and leagues, playing the last two as a reserve for the New York Yankees.

This month, the 35-year-old outfielder signed a one-year, contract with the Rakuten Eagles of Japan's Pacific League.