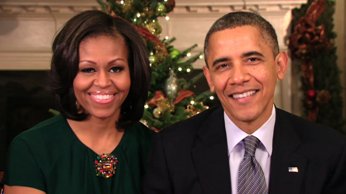 President Barack Obama continued on Saturday a four-year Christmas tradition of thanking the U.S. military servicemen and women in his weekly address.

"The war in Iraq is over. The transition in Afghanistan is under way. After a decade of war, our heroes are coming home. And all across America, military families are reuniting," he said. "So this week, let's give thanks for our veterans and their families."

As in recent years, the president recorded the message with his wife, Michelle, who noted the burdens carried by military families.

"Across this country, military spouses have been raising their families all alone during those long deployments. And let's not forget about our military kids, moving from base to base and school to school every few years, and stepping up to help out at home when mom or dad is away," the first lady said. "Our military families sacrifice so much on our behalf, and Barack and I believe that we should serve them as well as they serve this country."

The president also noted the efforts made by many to aid those affected by Superstorm Sandy and the shooting in Newtown, Connecticut.

"On behalf of my favorite Americans -- Michelle, Malia, Sasha and Bo -- Merry Christmas, everybody," Obama said.