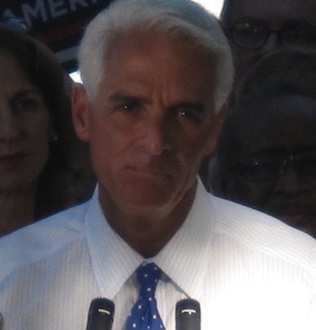 The comments by Crist, a former Republican who recently switched to the Democratic Party, come as he considers a run for Florida's governorship in 2014, potentially challenging Scott if he chooses to seek re-election.

"The law, among other things, put ridiculous restrictions on the rights of everyday law-abiding Floridians to register their fellow citizens to vote and reduced the number of early voting days from 14 to eight," Crist said.

Crist added that Scott and the Florida legislature's changes to the state's voting laws resulted in "unnecessary confusion and suppression on Election Day."

Last cycle, Florida allowed two weeks of early voting, which was shortened this year to eight days. Election boards were permitted to schedule as little as 48 hours of early voting. After long lines on November 6, Scott ordered a review of Florida's voting process with a particular emphasis on areas where voters waited four hours or longer to cast their ballots.

"The outcome of these decisions was quite obvious. Florida, which four years earlier was a model for efficiency, became once again a late-night TV joke," Crist said pushing for national standards on voting laws and longer early voting days.

"People are frustrated in our state," Scott told CNN's Soledad O'Brien Wednesday. Scott said changes in size of polling locations, length of ballots and the number of early voting days are needed.

"I complied with the law. We had an election bill that was passed my first year in office by the legislature, it was approved by the Justice Department," he said. "But we do need change."

Crist's sharp criticism comes after a Quinnipiac poll released Wednesday showed 45 percent of voters in the Sunshine State disapprove of the job Scott's doing in office, while 36 percent approve. Elected in 2010, Scott is now entering the second half of his term but more than half of voters-52 percent-say he doesn't deserve a second four-year term.