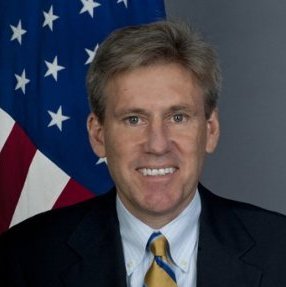 They were in hiding in a place security officers called a "safe area." It was anything but.

Outside an angry crowd grew, gunfire rang out and a fire blazed.

Thick smoke blinded the three trapped men. The intruders banged on the fortified safety gate of the bunker-like villa.

A security officer handed his cell phone to Ambassador Chris Stevens. Prepare for the mob to blast open the locks of the safety gate, the officer said.

Vivid new details of the attack on the U.S. Consulate in Benghazi, Libya, were released Tuesday night by a federal committee trying to come to grips with the violence that led to the first murder of a U.S. ambassador since 1988 and the deaths of three other Americans.

The report spoke of grossly inadequate security, an issue that Stevens had complained about well before September 11.

Instead of blasting their way into the villa, the crowd retreated for some reason. But the fire still blazed.

Stevens used the cell phone to try to alert others about the attack.

Struggling to see, choked by smoke, he dialed.

He may have wanted to tell embassy officials in Tripoli that he and the small security detail at that 13-acre compound were in big trouble.

They were outmanned, outgunned. The militants had doused a large area with diesel fuel and started a hideous fire.

He may have wanted to say that he was trapped in a building they called Villa C with a security officer, and Foreign Service Information Management Officer Sean Smith.

They had to flee to the villa after intruders stormed the walled-in consulate compound armed with machine guns and rocket-propelled grenades.

But in that 9:50 p.m. phone call, Stevens could only tell the U.S. deputy chief of the mission in Tripoli that they were under attack.

Though fierce and sudden, the attack may not have been surprising for some.

U.S. diplomats who worked in Libya, a country struggling to form a government after overthrowing longtime dictator Moammar Ghadafi, had repeatedly asked for more security.

American officials, for the most part, were well-received in Libya, where many locals were grateful for the help the United States provided in overthrowing Ghadafi.

There were still many Ghadafi loyalists, there was easy access to guns and the new fledgling government was having a difficult time maintaining security.

On June 1, a car bomb exploded outside a hotel in Tripoli where Stevens was staying.

The same month, Stevens had to move with his security team from the hotel because of a "credible' threat.

On June 6, a roadside bomb exploded near the U.S. compound in Benghazi, hurting no one but blasting a large hole in a wall of the compound.

The threats continued for U.S. officials and diplomats from other countries -- but security staffing remained unchanged.

The ambassador is missing

But now, there was no time to fret about woeful security.

Black smoke was filling up the safe area.

Stevens, Smith and the security officer crawled to a bathroom, hoping to open a window.

The security officer placed towels under the bathroom door and flung open the panes.

It made things worse.

Despite the explosions outside, they would have to flee the safe area, the officer thought. The smoke had choked out the lights. They were in total darkness.

The officer left the bathroom, crawled through a hallway, banging on the floor and yelling that the ambassador and Smith follow him.

He slipped though another window and collapsed in an enclosed patio area.

And then he noticed it.

Stevens and Smith were not there.

The officer slipped back through the window several times, even though the intruders were still shooting at him.

The smoke and heat was unbearable. He could not find either man.

He used a ladder to climb to the roof of the villa and radioed for help.

He had been in the smoky room for so long he could hardly speak. It took some time for the officers on the other end of the line to understand what he was saying.

He did not have Smith, he said. And the ambassador is missing.

The battle at the Annex

Three other security officers had barricaded themselves in another building when the siege began.

Once the first wave of attackers seemed to retreat, the officers got out of their "defensive" positions and drove an armored car to the villa. They found their colleague on the roof, vomiting, about to pass out.

The three officers crawled through the smoke inside.

They found Smith. They dragged his body out. But they were too late.

A team, from a nearby U.S. facility called the Annex, arrived and helped search for Stevens. They could not find him.

Concerned that the large crowd of militants was about to overtake the entire compound, they decided to flee back to the Annex without Stevens.

Men in the crowd began shooting, the bullets almost piercing the armored vehicle and blowing out two of its tires.

They drove on. At least two vehicles followed them.

They made it to the Annex, preparing for another fight. It was about 11:30 at night.

Just before midnight, bullets began hitting the Annex. This started a gun battle that lasted for an hour.

Hours passed and no one knew where Stevens was.

About 2 a.m., the U.S. Embassy in Tripoli received a phone call.

It was from the cell phone of the security officer who had given his phone to Stevens.

The man on the line spoke Arabic, telling embassy officials that Stevens had been taken to a hospital in Benghazi.

Officials could not determine what hospital Stevens was taken to.

Some wondered if the phone call was a trick from militants who wanted to lure U.S. officers to their death.

A Libyan official was sent to Benghazi Medical Center. He said Stevens was there.

Even though the ambassador showed no signs of life, doctors worked to revive him for 45 minutes.

It was too late.