Obama Is Time Magazine Person of the Year 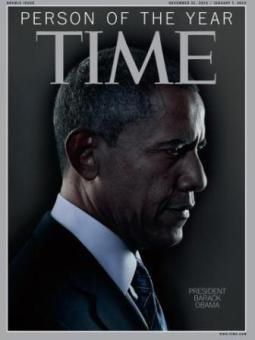 "We are in the midst of historic cultural and demographic changes, and Barack Obama is both the symbol and in some ways the architect of this new America," Time said in announcing its choice. "In 2012, he found and forged a new majority, turned weakness into opportunity and sought, amid great adversity, to create a more perfect union."

Democrat Obama won re-election to a second term in the Oval Office in November, beating Republican challenger Mitt Romney 51 percent to 47 percent in the popular vote and 302 votes to 207 votes in the Electoral College.

In doing so, he overcame political challenges -- "Obama is the first Democratic president since FDR to win more than 50 percent of the vote in consecutive elections and the first president since 1940 to win re-election with an unemployment rate north of 7.5 percent," Time points out -- but also cultural ones, capitalizing on his popularity with "young people, minorities, Hispanics, and college-educated women" to show that "demographic change is here to stay," Time said.

The magazine's four runners-up for Person of the Year were:

-- Malala Yousafzai, the 15-year-old girl who was shot in the head by a Taliban assassin for her outspoken support of education for girls in Pakistan.

-- Mohamed Morsi, Egypt's first democratically elected president who then won international praise for helping broker a cease-fire in the November fighting between Hamas and Israel in Gaza.

-- Fabiola Gianotti, who led a team of scientists at the European Organization for Nuclear Research (CERN) in capturing the Higgs boson particle, the so-called God particle which gives all other particles their mass.