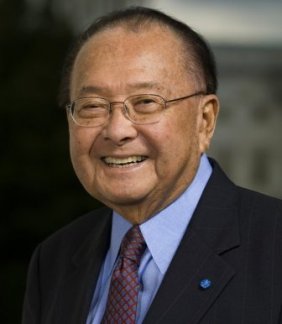 As the nation continues to grieve for the six adults and 20 children taken too soon in the Newtown, Connecticut, school shooting, a hero from another generation has slipped peacefully into the pages of history.

There were many who knew Sen. Dan Inouye, a Democrat and Medal of Honor recipient from Hawaii who passed away Monday, better than we did. But we had the good fortune of sitting with him this past summer, interviewing him and hearing some of the remarkable stories from his life in America's service. The portrait that emerged was that of a man of courage, character, and, perhaps above all, a singular spirit of peace and good will that was forged, paradoxically, amid some of the most horrendous carnage of the Second World War.

Some of Inouye's deeds -- his valor serving on the German front in one of America's most decorated (and heavily wounded) units, his Herculean political efforts on behalf of his home state -- have been well remarked. What we were especially struck by was his quiet, sagelike humanity.

There was his story, for example, of the day during the war when he came upon a German soldier who appeared to be preparing to kill him. The German, as Inouye told it, put his hand into his shirt, and Inouye, thinking he was reaching for his weapon, "smashed him in the face." As the man hit the ground, his hand fell out of his shirt, revealing photographs -- the soldier's wife, his kids.

It was, he said, what he always told people when they expressed disbelief that he, a decorated veteran, could stand up against the war in Iraq. "You've got to convince me before we go to war," he maintained. "You would never forget running over a dog -- the bump. If you don't forget that, how can you forget killing a human being?"

To hear Inouye talk was to sit beside a still, fathomless pool -- he spoke with a measured calm and wisdom that made clear how deep the dignity beneath it ran. In that way, he called to mind an echo of former Senate Majority Leader Mike Mansfield -- of whom, Inouye said, "If there was a mentor, it was him."

And he carried Mansfield's stoic ability to forge consensus and compromise with him, far into a legislative era known for its strident opposites. Of his 12 subcommittees, Inouye told us in July, "Nine of them have reported out their bills almost unanimously. About six were unanimous -- 30-0. The others were 29-1, 28-2. ... That's this month. It can be done! ... And 30-0 includes (Senate Minority Leader Mitch) McConnell!"

His secret was deceptively straightforward: a steady practice of simple gestures -- sitting with senators who had objections, calling a senior Republican "vice chairman" instead of "ranking member" ("I hate that word 'ranking' -- it's something like 'stink'!"), not speaking ill of anyone to the press.

"It might take some patience, but when I found out that you were pissed about (a) program, I'd sit down with you and talk about it," he told us. "Little things like that make a difference."

It was a basic humanity and a largeness of vision that Inouye extended to individuals from all backgrounds, born not only out of his experiences seeing his own people -- Japanese-Americans -- vilified and interned during World War II (Inouye himself signed up as soon as the U.S. government lifted its ban on American-born Japanese enlistments), but from his own crucibles in the war.

Describing the injury that cost him his right arm and very nearly his life, Inouye told us of being taken to the Army hospital, of being initially counted a hopeless case, of having his arm amputated without anesthesia, of ultimately receiving 17 blood transfusions to stay alive. Of those 17 transfusions, he explained:

"If it weren't for (the 92nd), I wouldn't be here. The war did a lot to change your ideas. I looked upon (people of color), as I do today, as brothers. What else can I do? After all, I've got the same blood."

Throughout its history, the nation has been blessed to have men like Inouye -- reserved, unboastful men, whose actions show the deep reservoir of quiet honor from which they draw their strength. Who show the courage that Hemingway called "grace under pressure."

When he was first brought to the Army field hospital after sustaining the wounds that would claim his arm, Inouye related, "The doctors looked at me; they're mumbling among themselves," he recalled. "Two minutes later a chaplain comes up -- opening words: 'God loves you.'

No one can know the ways of the Lord, but we would be surprised if he wasn't happy to meet Dan Inouye today.

Michael Zuckerman is a Harvard College graduate who works for the Boston Consulting Group in Washington. David Gergen is a senior political analyst for CNN and has been an adviser to four presidents. He is a professor of public service and director of the Center for Public Leadership at Harvard University's Kennedy School of Government. Follow him on Twitter: @David_Gergen.