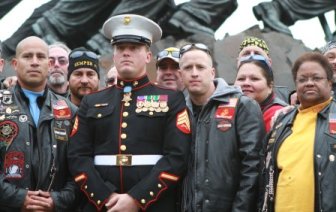 Dakota Meyer, one of America's most-recent Medal of Honor recipients, was the victim in an altercation that left him with minor injuries, Kentucky authorities said Thursday.

Meyer was taken to Westlake Hospital early Sunday morning after a scuffle at the Red Barn Event Center near his home in Columbia, according to Trooper 1st Class Billy Gregory of Kentucky State Police.

Meyer, 24, was treated and released. There was no word on what instigated the incident.

In September 2011, President Barack Obama awarded Meyer the nation's highest military decoration for risking his life to save 36 U.S. and Afghan troops caught in a blistering firefight.

Meyer was promoted to sergeant before he left the Marines.

CNN attempted to contact Meyer's through his book publisher, but had not received a response late Thursday afternoon