'I Have Lived One Crazy Life So Far,' Oregon Mall Gunman Says on Facebook 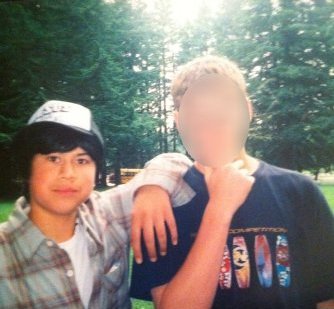 (CNN) -- Intended or not, the central image on the Facebook page of Jacob "Jake" Roberts, the Oregon shopping mall gunman, is haunting.

A "Follow Your Dreams" slogan painted on a wall is stamped "Cancelled" in red -- a work by famed street artist Banksy.

Describing himself, Roberts made an attempt at humor.

"Hey what's up guys my names Jake and I'm an alcoholic... Lol just kidding," Roberts wrote in the first line of his introduction, which included grammatical errors. "If you were to ask someone that knows me they would probably say that I am a pretty funny person that takes sarcasm to the max.

"I'm the conductor of my choo choo train," he continued. "I may be young but I have lived one crazy life so far."

Authorities have released a photograph of Roberts, 22, who wore a hockey-like face mask as he shot at holiday shoppers Tuesday at the Clackamas Town Center in Happy Valley, near Portland. He killed two people and then himself.

One of his Facebook friends, Brittany Curry, 21, told CNN she dated Roberts for five months last year. They met through mutual friends in the Portland area, she said.

"I am in shock. I don't know what to feel," Curry said in a telephone interview. "He was really a good guy. He was really happy. He put everybody before himself."

Roberts owned one gun, Curry said, but she didn't want to elaborate.

His Facebook page lists "shooting" as one of his 10 interests, along with camping, sleeping, rafting, BMX, sushi and spending money.

Roberts told Curry that his mother died at childbirth and he never met his father, she said. He left his maternal aunt's home at age 14, Curry said.

"He raised himself," Curry said. "He was doing it all on his own."

A friend from high school, Jordan Salazar, said she understood that Roberts' parents were not present in his life. He was a skateboarder back then, she said.

"I saw him a few times in the last year. He seemed normal" and a "good guy," she added.

Roberts wrote on his Facebook page: "My friends are my family and I don't think that will ever change. I have done a lot for myself in the past year some good and some bad but I still press on.

"I like hanging out with my friends and having a good time maybe get a little drunk every now and then. I like to think of myself as a bit of an adrenaline junkie... Yup that's right I'm a junkie lol. But I'm just looking to meet new people and see the world," Roberts typed.

When they were dating, Roberts was living in an apartment across from the Clackamas Town Center mall, Curry said.

Roberts wanted to be a firefighter and was taking classes at Clackamas Community College, Curry said.

"It was always his dream," Curry said.

In the meantime, he had been working as a cook at Big Bertha's gyro eatery in Portland for more than two years, Curry said.

About that job, Roberts commented on Facebook: "Right now I work at the most badass gyro shop in town. I am one of the few people that can say I love my job and actually mean it."

CNN's Paul Vercammen contributed to this report from Portland.