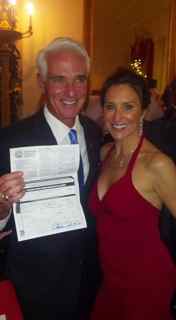 (CNN) -- Former Florida Gov. Charlie Crist, who served his state as a Republican then sought office as an independent, tweeted Friday night that he switched his party affiliation to Democrat.

Crist posted to Twitter a photo of himself holding voter registration paperwork and the message, "Proud and honored to join the Democratic Party in the home of President @BarackObama!"


The news may come as little surprise to Sunshine State Republicans who watched him campaign for Obama's re-election and speak at the Democratic National Convention.


In 2009 they noted his embrace of Obama at an event in 2009, when he was a Republican and serving as governor.


"I've had friends for years tell me, 'You know Charlie, you're a Democrat and you know it,'" Crist told the Tampa Bay Times newspaper.


His move could be seen as an early step toward a run for governor. Gov. Rick Scott's first term ends in early 2015.


Crist won his 2006 bid for governor as a Republican and previously served as the state's attorney general.


In 2010 he made an unsuccessful bid for the Republican nomination for a U.S. Senate seat, facing former state House Speaker Marco Rubio.


With tea party support, Rubio took a lead on Crist, who then left the GOP ahead of an anticipated primary loss and continued his run as an independent.


His endorsement of Obama's re-election effort referenced health care reform and the president's handling of the economy, as well as his own differences with the Republican Party. It drew criticism from Republicans who branded him "the silly putty of Florida politics."