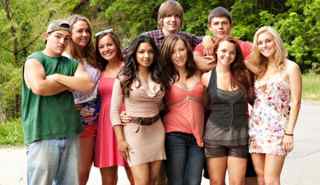 
That's the motto of the cast of the new MTV show "Buckwild," which has drawn the eye of a U.S. senator.


Sen. Joe Manchin, D-West Virginia, described "Buckwild" as a "travesty" in a letter to the television network.


"This show plays to ugly, inaccurate stereotypes about the people of West Virginia," he wrote.


Appalachian party animals bring together booze, brawls and backwoods, filling the void left by "Jersey Shore," the MTV hit that is going off the air after six seasons. On the characters' agenda: "throwing a dump truck pool party" and "building their own human slingshot," the show's website says.


Manchin called for the network to cancel the show, which is set to begin airing in January.


"Let me tell you: our people have given their all for this great country," Manchin wrote of his fellow West Virginians. "They've done the heavy lifting to produce the energy that is needed to produce the steel that builds our factories and cities. The proud veterans of our state have shed more blood and made more sacrifices than most other states to keep America free. We're proud of all we do to make America strong and secure the cherished freedoms that you seem so determined to abuse."

New Jersey Gov. Chris Christie vetoed tax credits for the show approved by a state economic development board in 2011, saying, "As chief executive I am duty-bound to ensure that taxpayers are not footing a $420,000 bill for a project which does nothing more than perpetuate misconceptions about the State and its citizens."

-- CNN's Rachel Wells and Stephanie Goldberg contributed to this report