Barefoot 'Homeless' Man from Viral Nypd Photo Is Not Homeless 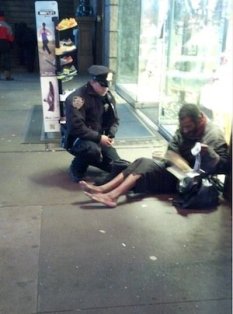 NEW YORK (CNN) -- The barefoot, apparently homeless man depicted in a widely publicized photo of a New York police officer offering him a pair of boots is not really homeless, according to the head of a city agency.

On the frigid night of November 14, police officer Lawrence DePrimo, a two-year veteran of the NYPD, was on patrol in Times Square when he came across a man in bare feet with "blisters ... about the size of my hands."

"My heart went out to this man," DePrimo told CNN. "I just went toward him and asked him if he wanted a pair of socks."

DePrimo then headed to a nearby shoe store and -- after asking the man his size -- bought winter boots and helped the man put them on his feet.

Unbeknownst to DePrimo, Jennifer Foster, a tourist from Florence, Arizona, had been close by and captured the moment of DePrimo helping the man. The NYPD posted the picture to its Facebook page, where it has garnered hundreds of thousands of comments.

Since then, the barefoot man, once thought to be homeless, has been identified by the New York Times as Jeffrey Hillman, 54. That name was confirmed to CNN by Hillman's older brother, Kirk.

"Seeing him on the street, the way I saw, that was a shock at that particular time with no shoes and in the cold," Kirk Hillman, 62 of Allentown, Pennsylvania, said, recalling the first time he saw the photo that went viral on the Internet. "My brother has been homeless for a while now, he's been on the street for many, many years of his life."

But according to the city, Jeffrey Hillman has housing -- an apartment in the Bronx.

Seth Diamond, commissioner of the New York City Department of Homeless Services, says that Jeffrey Hillman has been on the city's radar for years. "He has housing and that's one of the most important elements for a stable lifestyle," Diamond told CNN.

Jeffrey Hillman, who served in the military, is eligible for support through the federal Housing and Urban Development's Veterans Affairs Support Housing program, Diamond said.

Thanks to that program, Jeffrey Hillman has a Bronx apartment that has been paid for outright, Diamond said, emphasizing there was no need for the man to "panhandle on the streets to pay rent." Diamond would not give any details about Jeffrey Hillman's use of the apartment.

CNN was unable to locate Jeffrey Hillman. But Diamond described the situation as being one that his agency deals with regularly with the city's homeless population: "At times, he's receptive and at times he's more restive, and that is not atypical."

And Diamond said he remains steadfast and vigilant in this case, as in others. "Mr. Hillman needs to be living a better and healthier life. We have incredibly dedicated people who do not take no for an answer," Diamond says, "We just have to keep at it."