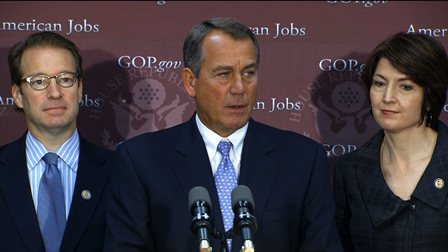 WASHINGTON (CNN) -- Taxes on the wealthy are going up, House Speaker John Boehner conceded on Wednesday in challenging President Barack Obama to sit down with him to hammer out a deal for avoiding the fiscal cliff.

Obama, however, continued to insist on Republicans first ensuring no tax hike for anyone but the top 2% of Americans as a first step toward a broader agreement on tackling the nation's chronic federal deficits and debt.

The statements reflected how negotiations on the automatic spending cuts and tax hikes set to occur on January 1 -- the fiscal cliff -- have evolved since Obama's re-election last month.

Republicans once opposed to any new revenue in their quest to shrink government now realize Obama's victory and public support for the president's campaign theme of higher taxes on the wealthy leave them with little negotiating leverage.

Less than four weeks from the fiscal cliff, GOP leaders face a choice: Agreeing to Obama's demand to hold down tax rates on most Americans while allowing higher rates on the wealthiest 2%, or being blamed for everyone's taxes going up in 2013.

The major unresolved question of negotiations involving the White House and congressional leaders is whether eliminating tax deductions and loopholes -- as proposed by House Republicans -- can raise enough revenue without hitting middle class Americans too hard.

"We have got to cut spending and I believe it is appropriate to put revenues on the table," Boehner told reporters on Wednesday. "Now, the revenues that we are putting on the table are going to come from guess who? The rich."

He continued by saying "there are ways to limit deductions, close loopholes and have the same people pay more of their money to the federal government without raising tax rates, which we believe will harm our economy."

In remarks to business leaders on Wednesday, Obama said Boehner and Republicans have to take the first step.

"I think there is recognition that maybe they can accept some rate increases as long as it is combined with serious entitlement reform and additional spending cuts," the president said. "And if we can get the leadership on the Republican side to take that framework, to acknowledge that reality, then the numbers actually aren't that far apart."

He added that "we can probably solve this in about a week -- it's not that tough."

At the same time, Obama rejected tying the negotiations to the need to raise the federal debt ceiling, like the brinksmanship last year that led to an unprecedented downgrade in the U.S. credit rating.

Boehner has said a debt ceiling increase would require an equal amount of spending cuts or other deficit reduction.

"If Congress, in any way, suggests that they are going to tie negotiations to debt ceiling votes and take us to the brink of default once again as part of a budget negotiation, which by the way we have never done in our history until we did it last year, I will not play that game," Obama said. "Because we've got to break that habit before it starts."

Polls show that more Americans will blame Republicans, instead of Obama and Democrats, if there is no deal and the nation goes over the fiscal cliff.

Republican Rep. Raul Labrador of Idaho acknowledged Wednesday that his side was losing the messaging battle.

All signs point to a continuing standoff, at least for now. No formal negotiating sessions are known to be scheduled, and congressional aides say no back-channel discussions are taking place.

Boehner and other Republican leaders implored through the media for Obama to talk to them about the deficit-reduction plan they offered earlier this week, which the White House rejected as unrealistic.

Asked about Congress scheduling no further business this week with GOP members going home, Boehner said: "I'll be here and I'll be available at any moment to sit down with the president to get serious about solving this problem."

Rep. Kevin McCarthy added a dramatic flair, calling the next 72 hours "critical" for the negotiations.

If Obama "sits back and continue to play politics, that'll give your answer of where we're going," he said, calling the moment "an opportunity for the president to lead."

At issue are competing proposals by Obama and House Republicans that coincide in some areas but differ on the tax-rate question.

Obama demands that the House immediately pass a measure already approved by the Senate to extend tax cuts for families making less than $250,000 a year while allowing rates to return to higher Clinton-era levels for wealthier households.

Both sides agree that the 98% of Americans making less than $250,000 a year should avoid a tax hike when the tax cuts from the Bush administration expire on December 31, Obama and Democrats argue. They call for the House to guarantee that outcome by passing the Senate measure now.

Once that happens, Obama and Democratic leaders promise, they will work out compromises on other deficit reduction steps sought by Republicans, such as reforms to the Medicare and Medicaid entitlement programs as part of further spending cuts.

In an interview with Bloomberg TV aired on Tuesday, Obama said Republicans need to accept the reality that deficit reduction requires higher tax rates on the wealthy.

"The issue right now, that is relevant, is the acknowledgment that if we're going to raise revenues that are sufficient to balance with the very tough cuts that we have already made and the future reforms in entitlements that I'm prepared to make, then we are going to have to see the rates on the top 2% go up, " the president said. "We will not be able to get a deal without it."

House Republicans led by Boehner made a major proposal on Monday by offering a series of steps to reduce the nation's chronic federal deficits by $2.2 trillion over 10 years.

While the Republicans gave ground by calling for more revenue through tax reform, the plan only mentioned unspecified elimination of some deductions and loopholes.

At the same time, they rejected the Democratic call for higher tax rates on wealthier Americans, contending the move would inhibit economic growth by raising taxes on small business owners, many of whom declare business profits on their personal income tax returns.

The White House and Democratic leaders immediately rejected the Republican approach, saying it would require middle-class taxpayers to assume a greater burden while easing rates on the rich.

On Tuesday, leading conservatives blasted the House Republican proposal that breaks with years of GOP orthodoxy by calling for more taxes to be paid by wealthier Americans.

Sen. Jim DeMint, R-South Carolina, said the "offer of an $800 billion tax hike will destroy jobs and allow politicians in Washington to spend even more." Sen. Rand Paul, R-Kentucky, said it would be "a huge mistake to raise taxes. It will cripple the economy."

However, some top Senate Republicans -- many of them conservatives -- withheld harsh criticism of the plan even as they refused to embrace it.

Senate Republican Leader Mitch McConnell sidestepped the question when asked directly if he backed the plan.

"I commend the House Republican leadership for trying to move the process along and getting to a point where, hopefully, we can have a real discussion," McConnell said.

Sen. Charles Grassley of Iowa, a senior Republican on the Finance Committee, said he would support Boehner's plan to raise revenue, but only if there is a "willingness on the part of Democrats to accept spending cuts that are three-to-one or four-to-one."

The current negotiations take place amid the lame-duck session of Congress before the newly elected legislators arrive in January. Possible outcomes include an agreement now to avoid the fiscal cliff and devise a framework for further negotiations in the new Congress on a broader deficit reduction deal.In an While the White House has made clear Obama will veto any measure that fails to increase tax rates on the wealthy, aides have signaled a possible willingness to negotiate the specific rate increase.

Asked repeatedly Tuesday about whether Obama insisted on a return to the 1990s rates on income over $250,000 for families or $200,000 for individuals, White House spokesman Jay Carney responded by saying the president would refuse to sign any measure extending the current lower rates.

In the interview with Bloomberg TV, Obama said lower tax rates for the wealthy could be negotiated as part of broader tax reform in 2013, but only after those rates increase now.

It also would close loopholes, limit deductions, raise the estate tax rate to 2009 levels and increases tax rates on capital gains and dividends.

The Obama plan includes $50 billion in stimulus spending for programs intended to create jobs, such as repairing roads and bridges.

Experts have said failing to reach a fiscal cliff deal and devise a framework for a broader deficit reduction package to be negotiated when the new Congress is seated in January will cause economic turmoil.

The non-partisan Tax Policy Center estimates that middle-class families would pay about $2,000 a year more in taxes without action.

For now, the debate has the business community perplexed, said Fred Smith, the chief executive officer of FedEx Corp., considered a bellwether on the economy.

Smith told CNN Tuesday that he and other top business leaders "look at the situation in Washington with complete amazement and dismay."

"The problem is the ideological pinnings on both sides of this argument are so difficult to bridge," Smith said, adding it will "be hard for them to get a deal."