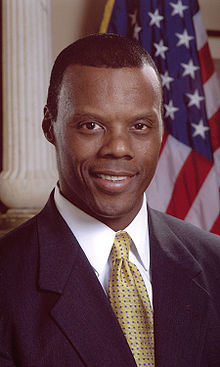 (CNN) -- The prospect of former congressman J.C. Watts leading the Republican National Committee was met with chuckles by members of the organization Monday, who said that current chairman Reince Priebus is all-but-guaranteed to be re-elected to his post next month.

Watts, a former Oklahoma congressman who for a time in the 1990s was the only African-American Republican serving in the U.S. House, told Politico over the weekend that he is being "encouraged" by Republicans to seek the RNC chairmanship.

Watts chided the GOP for "old, tired, pathetic" efforts at minority outreach, but he stopped short of openly criticizing Priebus or declaring his intention to seek the chairmanship.

Members of the 168-person RNC, however, were quick to pop the Watts trial balloon on Monday, dismissing the idea with a mixture of skepticism, disbelief and even a hint of ridicule.

"A little late to the party?" cracked one RNC member.

"Reince did a great job leading us out of the abyss," Ash told CNN. "I know he'll do a great job moving forward. I'm sure if J.C. wants to get involved he'll have an opportunity like many people in the coming months and years."

Another influential RNC member, asked about the Watts story, said in an email: "He'd have no prayer ... I gotta believe J.C. won't run unless it's just to get attention."

While Republican nominee Mitt Romney lost his presidential bid and the RNC's voter turnout operation took a beating on Election Day, Priebus is credited with repairing the dismal financial state of the party, which was more than $22 million in debt when he took over.

Former Indiana national committeeman Jim Bopp, a longtime conservative voice inside the organization, said Priebus "has overwhelming support for reelection as chairman" thanks largely to his fundraising prowess.

"There is plenty of blame to go around after this loss but Reince does not share in much of it," Bopp said. "He did his job -- very well."

Sources on the committee say Priebus and his supporters have locked down at least 120 votes for re-election and perhaps as many as 150 confirmed supporters - far beyond the 85-vote simple majority needed to win.

With such full-bodied support, a challenge to Priebus, particularly from a committee outsider like Watts, seems unlikely.

Some Priebus supporters on the committee say the Watts-as-chairman storyline is at best a vanity project for the former college quarterback, and at worst a low-grade effort by former RNC Chairman Michael Steele to tweak Priebus, a former Steele ally-turned-rival who ousted the controversial ex-chairman from his post in early 2011.

Their evidence for the latter claim: Watts' business partner, Elroy Sailor, is married to Angela Sailor, a top official at the RNC during Steele's tenure there.

"Former U.S. Rep. J.C. Watts is seriously considering a run for the Chairmanship of the RNC," Welday wrote in the email, which was provided to CNN by a Republican who received it. "I hope you'll take a look at the attached article, share it with others and let me know how you feel about the idea."

Time is running out for Watts if he is serious about a launching a bid.

The RNC will vote on the chairmanship at its Winter Meeting in Charlotte, North Carolina in late January. With the holiday season approaching, that leaves little time to assemble a whip team and begin drumming up support inside the committee membership.

RNC sources said Priebus is planning to publicly announce his re-election team in the coming days.

He will also roll out a team of officials to preside over a "four-year plan" for the Republican Party, sources said, an initiative related to the much-discussed GOP "autopsy" that Priebus called for in the aftermath of Romney's defeat.