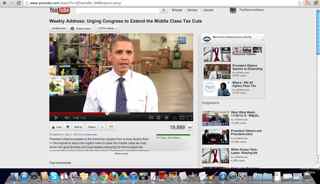 "The president has said he wants a so-called balanced approach to solve this crisis," Hatch said in the GOP weekly address. "But what he proposed this week was a classic bait-and-switch on the American people."

At issue is the end-of-the-year deadline for Congress and the White House to find a deficit-reduction agreement in order to avoid automatic tax increases and spending cuts, known as the fiscal cliff.


"All of that upfront -- in exchange for only $400 billion in spending cuts that come later," said the aide, calling the offer "completely unbalanced and unrealistic."


Republican aides said the $1.6 trillion was higher than previously discussed. Democrats said the number should not be a surprise, adding Obama discussed it on the campaign trail.


"But we've seen an utter lack of leadership from President Obama, and his allies on the left have shown little -- very little -- to no willingness to tackle real, structural entitlement reform," he said. "There is no manner of tax hike that can save Medicare or Medicaid. These programs can only be fixed with real reforms that go to the heart of how they work."


Obama, in his weekly address, also stressed that the clock was ticking.


With the Bush-era tax cuts expiring at the end of the year, both parties agree the cuts should stay in place for roughly 98% of Americans who fall below the income threshold of $250,000.

Republicans want those tax cuts to also remain for high income-earners, or the other 2 percent.

Democrats, however, insist the tax cuts should expire for the very wealthy and let the rates go up. They also call for closing loopholes, limiting deductions and raising taxes on capital gains for additional revenue.

But with both sides in a stalemate over taxes for the very wealthy, Obama said Congress should come up with a plan right now to extend the tax cuts for the lower 98 percent and deal with the wealthy at a later date.

"Congress can do that right now. They can give families like yours a sense of security going into the New Year," the president said in his address. "And with the issue behind us, we'll have more time to work out a plan to bring down our deficits in a balanced way -- including by asking the wealthiest Americans to pay a little more."

Some House Republicans, notably Rep. Tom Cole of Oklahoma, made headlines this week when they sided with Obama on the tax compromise. His fellow conservatives fired back, saying such a tactic would give Democrats more leverage in the negotiations.

But the president argued it was better to resolve the situation piece-by-piece, rather than run the negotiations down to the wire for one comprehensive package and risk the possibility of no agreement.

"So let's begin by doing what we all agree on. Both parties say we should keep middle-class taxes low," he said. "But it's unacceptable for some Republicans in Congress to hold middle class tax cuts hostage simply because they refuse to let tax rates go up on the wealthiest Americans."

CNN's Deirdre Walsh and Jessica Yellin contributed to this report.