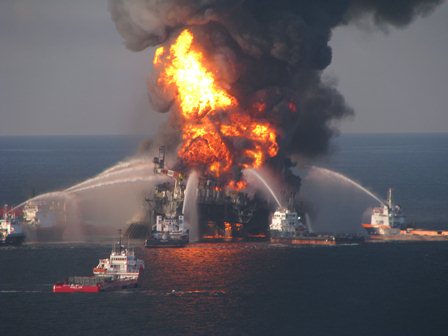 (CNN) -- The U.S. government will block oil giant BP from new government contracts over its "lack of business integrity" stemming from the 2010 oil spill in the Gulf of Mexico, the Environmental Protection Agency said Wednesday.

The decision follows the London-based company's agreement November 15 to plead guilty to criminal charges including manslaughter, obstruction of Congress and environmental violations related to the explosion of the Deepwater Horizon oil rig and subsequent release of about 205 million gallons of oil into the Gulf.

The EPA decision bars BP and its affiliate companies from winning new government contracts, grants or other business until the company can show the agency that it meets federal business standards.

It does not affect any existing BP contracts with the government, the EPA said. The extent of BP's business with the U.S. government wasn't immediately clear.

BP's U.S. press office did not immediately return a message seeking comment on the EPA announcement. A BP representative in London told CNN the company had no immediate comment.

Eleven workers died when the rig suffered an uncontrolled blowout and explosion on April 20, 2010. The mangled underwater wreckage leaked oil for 85 days, causing the largest environmental disaster in U.S. history.

The company agreed to plead guilty to 11 counts of manslaughter, one count of felony obstruction of Congress and environmental violations. The plea deal must still be approved by a federal judge.

BP agreed to pay $4 billion in criminal fines and penalties as a result of the charges -- the largest criminal resolution in U.S. history, according to prosecutors, who accused the company of fostering a "culture of privileging profit over prudence."

The company also settled civil securities fraud charges with the Securities and Exchange Commission with a $525 million payment.

The government is also seeking civil damages under the Clean Water Act. That lawsuit is set to go to trial in February.