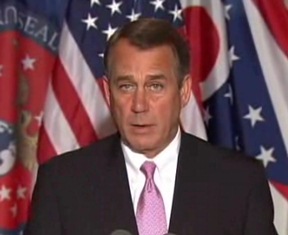 (CNN) -- As congressional leaders and President Barack Obama search for common ground to tame the national debt as the weeks dwindle down to end of the year, House Speaker John Boehner said the Affordable Care Act, often referred to as Obamacare, must be included in deficit negotiations.


"We can't afford it, and we can't afford to leave it intact," Boehner wrote of Obama's signature healthcare initiative in the Cincinnati Enquirer. "That's why I've been clear that the law has to stay on the table as both parties discuss ways to solve our nation's massive debt challenge."


Though Republicans have continually pushed for a full repeal of the law, Obama's re-election marked the next step in its implementation. Each state is required to decide whether to set up its own health care exchange - where individuals and small businesses can purchase affordable health care, subsidizing insurance for low-income consumers - or choose to have the federal government manage the state's exchange.


In the editorial Boehner lauded Ohio Governor John Kasich's decision Friday refusing to set up a state-run exchange, the result being the federal government management of the state's health care exchange.


As states decide how to comply with the law, leaders from both parties are in the midst of contentious dealings on how to reduce the nation's debt and avoid the so-called fiscal cliff - a series of federal spending cuts and tax rates increases set to go into place at the beginning of next year if Washington lawmakers fail to reach a compromise. At the crux of deficit negotiations is revenue. Republicans want to generate revenue by closing loopholes and tax deductions while Democrats have favored raising tax rates on wealthier Americans.

Since former Republican nominee Mitt Romney's defeat and the Supreme Court upheld most of the health care initiative, Boehner said the GOP's "tactics" must change in their effort to repeal Obamacare. Boehner underscored the law's expense and pushed a dismantling of the law through congressional oversight.


"With President Obama and his party still in control of most of Washington, stopping Obamacare will require both bold state leadership and vigorous oversight by members of the House of Representatives," he wrote.


Shortly after the election, however, Boehner told ABC he would not make repealing the law his mission saying Obamacare was the "law of the land." Boehner later walked back the comment tweeting the GOP's goal remains a full repeal of the law.