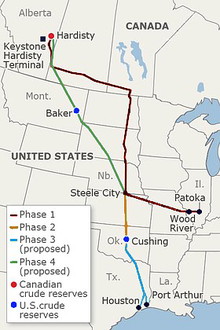 (CNN) -- The fight to block construction of the Keystone XL tar sands pipeline through east Texas stepped up Monday as protesters locked themselves to machinery.

Dozens of others formed a "human chain" to keep heavy machinery from moving around the proposed pipeline's path in Cherokee County, said Ethan Nuss, spokesman for the Tar Sands Blockade group.

Three protesters at another location suspended themselves from 50-foot pine trees with their life lines anchored by the construction equipment, Nuss said.

Cherokee County sheriff's deputies used "pain compliance" measures, including pepper spray, to remove the four protesters locked to the machinery, Nuss said. The four were dragged away "very aggressively and painfully" and arrested, he said.

Two others were arrested when they tried to block a cherry picker crane to remove the protesters from the trees, Nuss said. A 75-year-old woman was among those pepper sprayed and arrested, he said.

All of the blockade protesters were removed from the construction sites by 2 p.m. and 12 of them were arrested, he said.

Meanwhile, a sheriff's spokesman confirmed six arrests, but provided no other details.

TransCanada, the company building the pipeline, did not immediately respond to CNN calls for comment Monday.

"Today's Day of Action is in solidarity with local landowners struggling to protect their water and land from TransCanada's toxic tar sands pipeline," the protest group said in a written statement Monday.

While construction of some segments of the proposed 1,700-mile pipeline has not been approved, the Texas government and courts have cleared its path through that state. If completed, it would transport tar sands mined in Canada to refineries on the U.S. Gulf Coast.

Opponents want U.S. President Barack Obama, who in the past has rejected rapid approval, to outright reject the pipeline project, arguing it would be an environmental disaster.

Actress Daryl Hannah was arrested last month in Wood County, Texas, when she and another woman tried to stop a bulldozer from clearing land along the pipeline path.

Bill McKibben, founder of 350.org, said a demonstration in Washington on Sunday was to remind the Obama administration of its commitment to preventing fossil fuel based projects that they say are causing increased climate change.

"They said a year ago they would study it further, now that year is up, and in the meantime we've had the hottest year in America history, we've had an epic drought, we've had the Arctic melting and we've had Superstorm Sandy flooding the subways of New York," said McKibben.

"The pipeline has come to symbolize something much, much bigger than just one energy project, it's come to symbolize what is our energy future, and what President Obama is going to do on climate change," said activist Jane Kleeb of the anti-pipeline organization Bold Nebraska, in a state where the Keystone XL project would cut through predominantly agricultural areas.