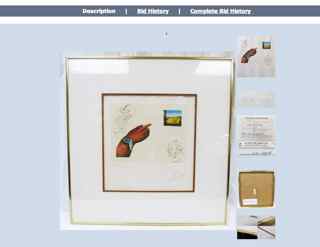 (CNN) -- When an anonymous donor gave art to the Goodwill as an early holiday gift this month, the staff thought it was junk.

"Across the board they thought it was ugly," said Shea Munroe, who sorts the art and collectibles donated at Goodwill Industries in Federal Way, Washington.

Co-workers told her: "What is that? And why would anybody want that?"

The art is actually a Salvador Dali original, by the master surrealist who in his day relished the role of public provocateur with his mind-bending imagery.

The work is a colored etching, and the framed piece even features the familiar Dali motif of a melting watch, placed on the wrist of a pointing hand.

Its title is "Reflection" or "Reflections," from "The Cycles of Life Suite," and the art is signed by Dali and numbered "126/150." The work is also labeled as an "etching and photolithography from collage."

Munroe was familiar with Dali, and she researched the work and its attached letter of authenticity.

She confirmed she had something special, though several co-workers knew nothing of the surrealist, not even his famously flamboyant moustache.

"This is probably the real deal," Munroe said of her discovery of the Dali work. "The manager knew who he was right away, and we were both really excited."

Goodwill is now auctioning the art on its website. As of late Friday afternoon, the bidding reached $10,505. Goodwill has noted that the artwork's paper "has some warping, as if from humidity," with some discolored speckling to one part of the matting and a few deep scratches and scuffs to the glass and frame, the website says.

Goodwill doesn't know the donor, who managed to sneak away during a busy time at the drop-off facility, Munroe said.

But the donor kept intact the back of the frame, which contained an envelope with a certificate of authenticity and registration number from a defunct gallery in North Hollywood, Ca.

An appraiser retained by Goodwill also confirmed the authenticity of the Dali, and the charitable organization also ensured the art wasn't stolen, said Amanda Bedell, spokeswoman for Goodwill in Tacoma, Wash. The nonprofit provides employment and training programs to people with disabilities and disadvantages, and the group sells donated goods in more than 2,600 stores.

Goodwill held on to the Dali for a week in case someone claimed it was accidentally donated, Bedell said.

"We don't know the background of what the circumstances were," Bedell said of the donation. "It's a steady stream of people coming in. It's not necessarily documented what every person comes in with."

About 74 million people in the United States and Canada donate annually to Goodwill, Bedell said.

"We have a very busy donation door, and we have several people who work that door," Munroe said, explaining how the donor was able to remain unknown.

When a signed piece of art arrives at a donation center, Goodwill sets it aside for special review, Munroe said.

Most donated goods are sold at Goodwill stores, but prizes such as the Dali are auctioned online -- to maximize their value, said Munroe, who works for Goodwill's online department.

The Dali is the highlight of her past six years of working for the nonprofit, in addition to her two years of service in the 1970s, she said.

Until this month, the biggest donations she oversaw were professional 35-mm cameras that fetched $8,400 on Goodwill's auction website, she said.

To the anonymous donor, Munroe, 58, offered a message: "I would say thank you for helping us with our mission because we have a lot of programs that put people to work, and it's people right here in the communities."

The bidding for the Dali piece is still short of the most prized art auctioned by Goodwill: A Frank Weston Benson oil painting, dated 1924 and also donated anonymously, was sold online by Goodwill in 2006 for $165,002.