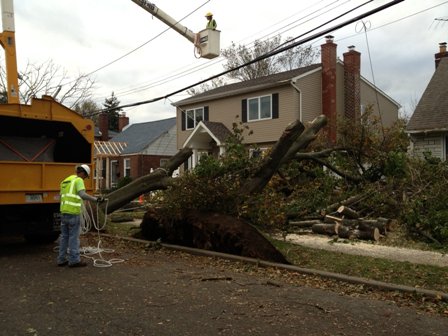 NEW YORK (CNN) -- It has been more than two weeks since Superstorm Sandy hit the Northeast, yet many still remain without power.

A lawsuit filed Tuesday by the two residents charges the area's main electricity providers -- Long Island Power Authority (LIPA) and its partner National Grid -- committed "gross negligence, breach of contract, and fraud," according to attorney Ken Mollins, who is representing the plaintiffs.

Although the suit, which does not seeks specific damages but calls on the court to award "a sum to be determined at trial," was filed by two individuals, Mollins entered the claim as a class-action, which would allow other residents to join as plaintiffs.

"This has the potential to be the biggest class-action lawsuit ever with possibly 1 million individuals joining," Mollins said.

As of Tuesday night over 13,000 customers still remained in the dark, according to LIPA's Storm Center.

Mollins is seeking accountability from the utility companies and believes they did not properly prepare for Sandy.

"In the week before the storm they did nothing to prepare," said Mollins. "They took no evasive action whatsoever."

In response to inquiries from CNN about the suit, LIPA spokesman Mark Gross said, "At this time we are focusing on completing restoration for our customers."

National Grid, a multinational company based in the United Kingdom, responded with a statement saying its workers are focusing on completing restoration and that they "continue to work with local officials and relief agencies to provide ongoing support to those communities and to be there for our customers."

CNN Legal Analyst Paul Callan who has experience in class-action lawsuits, does not believe this will be an easy win for Long Island residents because they will have to prove that the utility companies were negligent in planning for the storm.

"LIPA had horrible, horrible communication," said Susan Parker, who was out of power for two full weeks.

Parker, however, doesn't believe she will participate in the class-action lawsuit. "I feel very lucky that all I lost was my power, I just keep thinking priorities and what some other people have lost," she said.

"There's absolutely no question in my mind that LIPA did a terrible job." Gerson said. He and his family were displaced from their home for over 12 days, he said, adding that the difficulties from that situation will be a factor in deciding whether he and his family will join the lawsuit.

The lawsuit, which was filed in state court, came the same day that New York Gov. Andrew Cuomo bluntly criticized LIPA and called for its overhaul at a press conference.

"LIPA has been beyond repair for a long, long time," Cuomo said on Tuesday, "I believe it needs to be overhauled and you need a new system."

In the midst of heavy criticism for the company, the chief operating officer of Long Island Power Authority, Mike Hervey, announced his resignation on Tuesday, effective at the end of 2012, according to a statement from LIPA.