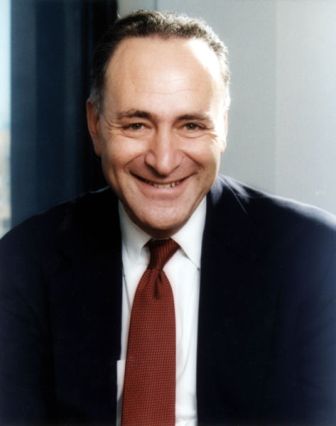 Schumer told NBC's "Meet the Press" Sunday that he and Graham have a plan designed to appeal to stakeholders on all sides of the highly contentious issue and he's optimistic that it can get through a gridlocked Congress.

"[Sen.] Graham and I are talking to our colleagues about this right now. I think we have a darn good chance using this blueprint to get something done this year," Schumer said.

The plan includes four key elements: stronger border security, creation of non-forgeable proof-of-citizenship documents, fairer legal immigration for desirable candidates, and a tough-love path to citizenship for those already in the U.S.

That path, Schumer said, would require applicants to learn English, wait their turn behind immigrants who've used proper legal channels, hold down a steady job, and refrain from criminal activity.

The long-simmering issue of immigration reform has been thrust into the spotlight again on the heels of Republicans' Election Day losses in races where the Latino vote played a key role. Mitt Romney, the GOP nominee, won only 27 percent of the Latino vote.

In the days since the election, Republican lawmakers, political commentators and thought leaders have taken on a more conciliatory tone when discussing immigration. Graham himself was quick to point out that Republicans missed an opportunity.

"Conservatism would sell with Hispanics. They're hard working, entrepreneurial, pro-life, pro-military," Graham said Sunday on CBS. "But the truth of the matter is the immigration debate that we engaged in 2006 and 2007 has built a wall between the Republican Party and the Hispanic community because of the tone and rhetoric."

Graham made clear that he wasn't inclined to miss the opportunity the next time around.

"It's one thing to shoot yourself in the foot. Just don't reload the gun. So I intend not to reload this gun when it comes to Hispanics. I intend to tear down this wall and pass an immigration reform bill."

But it remains to be seen how much support can be rallied. Schumer and Graham have made several attempts to tackle immigration reform. In 2010, President Barack Obama expressed support for Schumer and Graham's efforts, saying he was "pleased" to see a promising bipartisan framework.

"We had put together a comprehensive detailed blueprint on immigration reform. It had the real potential for bi-partisan support based on the theory that most Americans are for legal immigration but very much against illegal immigration," Schumer said.

However, their efforts drew fire from all sides, with the progressive publication The American Prospect at one point calling their plan "ridiculous" and GOP party committees in Graham's home state of South Carolina censuring him for his congressional votes on immigration. Talks eventually stalled.

On Sunday, Schumer didn't offer any more specifics about the timeline for talks or implementation. He did emphasize the need for compromise from both sides and a strong role for moderate Republican voices as the talks unfold.