After Election Victory, Arpaio Says He Wants to Meet with Latinos 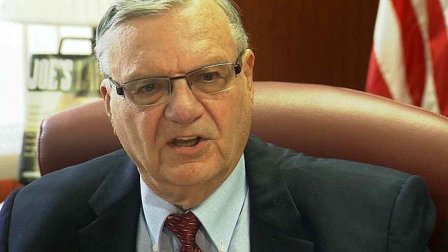 (CNN) -- The Arizona sheriff known nationwide for his tough stance on undocumented immigrants says he has a mission now that he's clinched another re-election victory: meeting with Latinos.

Both the American Civil Liberties Union and the U.S. Justice Department have filed lawsuits accusing Arpaio of civil rights violations and racial discrimination against Latinos.

Last December, the Justice Department said it had found cause to believe the sheriff's office "has engaged in a pattern of misconduct that violates the Constitution and federal law" and, under the leadership of Arpaio, discriminated against Latinos through traffic stops, detentions and arrests and against Latino inmates with limited English proficiency by punishing them and denying them critical services.

Arpaio has denied any discrimination or civil rights violations, and one of his attorneys called the Justice Department investigation a "witch hunt."

On Tuesday night, the sheriff said he has no intention of changing his policies in his sixth term.

"I have a message for the president of the United States of America. He's gone after me from the White House, the Department of Justice, the FBI, I can go on and on. But I will continue to enforce all the laws, including illegal immigration," Arpaio told supporters. "Nothing changes."

The 80-year-old sheriff, who has been in office for two decades, has fierce critics and staunch supporters. Latino voters mobilized in an attempt to defeat him at the polls this year. Meanwhile, Arpaio told supporters Tuesday night, financial support for his campaign poured in from across the country.

Rather than shy away from controversy, he has embraced it, touting his nickname of "America's Toughest Sheriff" on his website and boasting that his inmate meals are the cheapest in the nation, costing between 15 and 40 cents apiece.

He garnered 53% of votes cast in this year's election, and his chief opponent, Democrat Paul Penzone, conceded.

"Arpaio won, you have to accept it," said Alberto Gutier, a Republican analyst. "He said it very clearly that he was going to be the sheriff that enforces laws, and not who makes laws."

But some Latino activists -- who had hoped Penzone would unseat Arpaio -- weren't ready to give in yet.

"The pledge to each person whose door we knocked on, the people that we registered in front of stores and apartment buildings, is that every one of their votes will be counted," said Petra Falcon, director of Promise Arizona, an immigrant advocacy organization.

Other activists said that problems for immigrants go far beyond Maricopa County.

"Many people are happy that (President Barack) Obama won again and others are upset that Arpaio won, but we know that they both work together to deport members of our community," said Carlos Garcia, director of the Puente human rights organization.

While authorities county provisional ballots, other opponents of the controversial sheriff are hoping that a federal judge will rule in the civil rights cases against the Arizona sheriff and stop the sheriff from cracking down on undocumented immigrants.

But Arpaio said Tuesday night that he had no intention of leaving public life any time soon.

A crowd of supporters cheered.