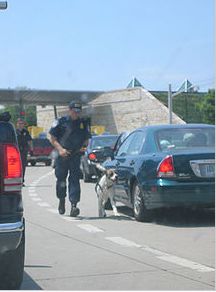 WASHINGTON (CNN) -- Franky and Aldo were not at the Supreme Court on Wednesday to defend their drug-detecting abilities, but it is likely they would have had little to say to the justices who were probing the limits and reliability of their talents when police search for contraband. The German shepherd and chocolate Labrador were in Florida, where the appeals over their work originated.

At issue: When and if dog "sniffs" of illegal substances can justify subsequent searches of homes and cars. Two appeals from criminal defendants could have far-reaching effects on when a person's private holdings can be subjected to intrusion without clear probable cause or a valid search warrant.

In one of the cases, dealing with a home search, the high court appeared ready to pare the discretion of officers to conduct surveillance outside a private residence -- including the porch area -- and then rely on marijuana odors to secure a warrant.

"It seems to me crucial that this officer went onto the portion of the house to which there is privacy," said Justice Antonin Scalia, "and used a means of discerning what was in the house that should not have been available in that space."

Justice Ruth Bader Ginsburg said that unlike trick-or-treaters (it was Halloween after all) or a door-to-door salesman, there was no implied consent for the presence of police in this case.

"You can say, yes, there's an implied invitation to the Girl Scout cookie seller, to the postman, even to the police officer, but not police officer with dog, when the only reason for having the dog is to find out if there's contraband in the house," she said.

The cases come as recent studies have raised questions about the accuracy of canine alerts about drug odors. Justice Sonia Sotomayor cited one analysis showing only a 12 percent success rate for dogs in a controlled setting.

The Fourth Amendment grants the "right of the people to be secure in their persons, houses, papers, and effects, against unreasonable searches and seizures