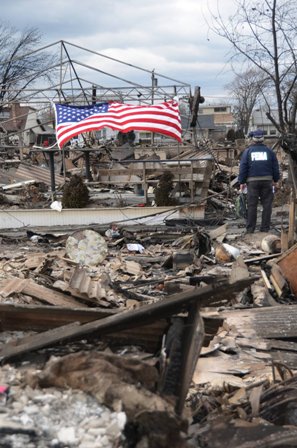 (CNN) -- Widespread damage in the East from Superstorm Sandy threw state and local agencies tasked with running next week's election into turmoil, sending them scrambling to make sure they can accommodate voters.

The storm heavily damaged parts of the mid-Atlantic coastline and left millions without power from the Carolinas to New England, raising the possibility that the storm's impact could disrupt Election Day efforts.

Some fire stations, schools, community centers and other venues that serve as polling places will have to be cleaned up if they were flooded or damaged. Other polling spots may need to be relocated if they are too damaged to be used.

Many electronic voting machines -- used now by two out of every five counties nationwide, according to the Voting Technology Project -- often require consistent power to work properly.

If electricity remains out next Tuesday, those areas may have to scramble to find alternatives, including paper ballots.

It is unlikely voters in the hardest hit states will be given an extension if they cannot access polls, despite damage from the storm.

Only Congress can change Election Day, according to an 1845 law. If it opts to alter the timetable -- something never previously done -- every state would have to be included.

Still, officials in most states hit by the storm expect a smooth day next Tuesday.

NEW JERSEY: "The functioning of our Democracy is critically important" New Jersey saw fierce winds and flooding from Sandy and Republican Gov. Chris Christie was not focused on Election Day logistics.

"Right now I'm much more concerned about preventing any other loss of life, getting people to safe places," he said.

Echoing comments by President Barack Obama on Monday, Christie said, "Then we'll worry about the election. The election will take care of itself."

Voting deadlines in his state for early voting continued even though Christie said he doesn't "give a damn about Election Day."

Tuesday marked the last day New Jersey voters could submit their application to receive their no-excuse mail ballots, though voters can apply to vote by mail in-person until 3 p.m. on Monday.

Newark Mayor Cory Booker said he was confident that New Jersey residents would be able to cast ballots next week.

"I think that obviously the functioning of our Democracy is critically important," Booker told CNN's Soledad O'Brien on Tuesday.

But the Democrat said, he was focusing on emergency needs first, saying that there would be time to worry about voting.

"I'm sure that as Election Day gets closer, we're going to find ways to make sure that's it's as functional as possible and people are able to vote," Booker said.

VIRGINIA: "We have contingency plans in place" In Virginia, one of the tightest of the battleground states where the storm left more than 114,000 customers without power, Republican Gov. Robert McDonnell said he doesn't anticipate a problem with voting on Election Day.

McDonnell said on CNN's State of the Union on Sunday that Virginia had lined up additional crews to help with post-storm power needs. He added that getting power to polling places would be "a priority, moved up to the same level as hospitals and police stations to have power restored."

The state said on Tuesday that it would also extend absentee voting through Nov. 3. Virginia does not have blanket early voting.

Lisa Connors, a spokeswoman for Fairfax County government, said officials who manage elections locally were making assessments but did not anticipate any disruptions. The county is one of the swing state's most populous and most heavily contested areas.

Only 10 of the state's 134 counties experienced in-person absentee voting disruptions this week, according to Justin Riemer, spokesman for the secretary of Virginia's State Board of Elections.

Those occurred mainly in the mountainous areas and in the northern part of the state but most officials continued to work, Riemer said.

Still, Riemer says the State Board of Elections remains in contact with the local power companies to ensure Election Day polling stations are given priority status. Virginia, like other states, has options.

"We do have a provision in the law that allows for the polling place to be relocated," Riemer said, "so that's a card we can use if we need to."

The New York State Board of Elections posted an advisory on its website warning voters that poll site information may change.

OHIO, PENNSYLVANIA: "One or two polling places will have to be moved" Voters in the states on the outskirts of Sandy's wrath will fare better on November 6.

Spokesmen for the Ohio and Pennsylvania secretaries of state don't anticipate any problems come Tuesday.

Pennsylvania has some flexibility.

"Counties have emergency plans that are put in place every year. It's not unusual for us to have polling places every year that need to be changed (for one reason or another)," said Ron Ruman spokesman for the Pennsylvania Department of State.

Ruman said he didn't anticipate that more than "one or two polling places will have to be moved."

NEW HAMPSHIRE: "Power ... should be restored by the weekend" Disruptions aren't expected in the battleground state of New Hampshire either.

"It appears from emergency management agencies in New Hampshire that power throughout the state should be restored by the weekend, well in advance of Election Day," said Deputy Secretary of State David Scanlan. "Other than that we are ready to conduct an election."

OTHER STATES: Early, absentee voting extended Other states made adjustments to their advance voting arrangements.

Maryland Gov. Martin O'Malley issued an executive order canceling early voting on Monday and Tuesday and extending it through Friday.

Pennsylvania Gov. Tom Corbett issued an executive order extending the deadline to request absentee ballots in the counties that were forced to close by the storm until Thursday at 5 p.m.

Maryland, Ohio, West Virginia and the District of Columbia also offer some form of early voting. Virginia, Connecticut, Delaware, New Hampshire, and Pennsylvania are among the 15 states that do not.

CNN's Ashley Killough and Kevin Bohn contributed to this report