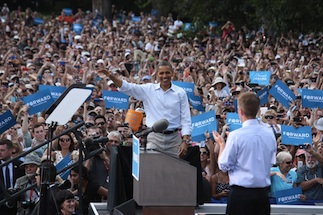 It's all tied up, according to a new national poll released two days before the presidential election. And the CNN/ORC International survey not only indicates a dead heat in the race for the White House, but also on almost every major indicator of President Barack Obama and Republican nominee Mitt Romney that was tested in the poll.

Forty-nine percent of likely voters questioned say they support the president, with an equal amount saying they back the former Massachusetts governor.

A Pew Research Center survey also released Sunday indicates the president at 50 percent and the GOP challenger at 47 percent, which is within the survey's sampling error.

"Fifty-three percent of women saying they plan to vote for President Obama compared to only 44 percent of men. That works out to a nine-point gender gap, which would be the largest since 1996," says CNN Polling Director Keating Holland. "On age, Obama is getting less support among younger voters than he did four years ago. But he manages a tie with Governor Romney among senior citizens -- a group he lost to Senator McCain by eight points."

The poll also indicates geographical divides, with the president leading in the Northeast, Midwest, and urban areas, and Romney ahead in the South, West, and suburban and rural areas.

It's not just the horserace number that's dividing American voters.

The president's favorable rating stands at 52 percent in the poll, with Romney at 51 percent. Fifty-one percent say they agree with Obama on important issues and 50 percent say the same thing about Romney. Fifty-six percent say that Obama has the personal qualities a president should have, with 55 percent feeling the same about the Republican nominee.

Does either party have an edge on enthusiasm?

According to the poll, the answer is no. Seventy-percent of registered voters who describe themselves as Democrats say they are extremely or very enthusiastic about voting, with an equal amount of self-described Republicans saying the same thing. Forty-nine percent say they will vote for the GOP candidate for Congress in their district; 48 percent say they will choose the Democrat.

But there are a few advantages for each candidate. On the one hand, the number of Americans who think things are going well in the country has risen 10 points since August, to 46 percent -- the highest number since April, 2007.

But that doesn't mean Americans are feeling better about the economy -- seven in ten say it is in poor shape, unchanged since September. And more people say that the economy will improve if Romney is elected than feel that way about an Obama victory. And the economy remains the number-one issue on the minds of American voters, with 61 percent saying it's extremely important to their vote. The deficit is second in importance at 55 percent, followed by health care at 51 percent, foreign policy at 47 percent and Medicare at 46 percent.

Obama's approval rating is also over the magic 50 percent mark, but just barely: 51 percent of all Americans approve of how he is handling his job as president, which doesn't give him a lot of breathing room.

While the president and Romney's favorable ratings are nearly identical, the Democratic Party is viewed more favorably than the GOP.

"That's something which might help Obama in an extremely close race," says Holland. "Obama also has inevitability on his side: 57 percent say he will win another term, compared to only 36 percent who think Romney will win. And with only 4 percent saying that they might change their minds before Election Day, time is running out to make that closing argument."

The CNN poll was conducted November 2-4 by ORC International, with 1,010 adult Americans, including 918 registered voters and 693 likely voters, questioned by telephone. The survey's sampling error for likely and registered voters is plus or minus 3.5 percentage points.