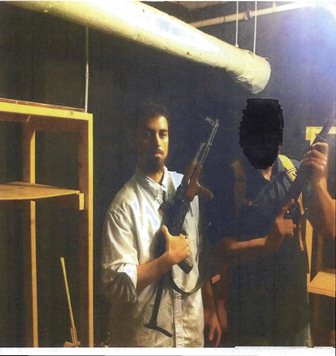 (CNN) -- A Massachusetts man was sentenced Thursday to 17 years in prison for plotting to attack the U.S. Capitol building and the Pentagon with remote-controlled airplanes loaded with plastic explosives.

Rezwan Ferdaus, 27, entered into a plea agreement in July and admitted to attempting to damage and destroy a federal building with an explosive device and to attempting to provide material support to terrorists. He was sentenced in U.S. District Court in Boston.

The Ferdaus case is one in a string of undercover operations that have thwarted terror attacks.

Ferdaus thought he was plotting with al Qaeda members, but in reality he was dealing with FBI undercover operatives, according to court documents.

In addition to the plane plot, Ferdaus constructed cell phone detonators for improvised explosive devices to kill American soldiers overseas, according to authorities.

In June 2011, he handed over his first phone detonator to the undercover agents. Later, the agents lied to Ferdaus, saying the phone was used to explode a device in Iraq which killed three U.S. soldiers. Legal documents in the case quoted Ferdaus saying "that was exactly what I wanted" and that he and his collaborators were "changing the world."

Ferdaus researched what he could do with remote-controlled aircraft similar to drones.

According to the government, in May and June 2011 he gave the undercover agents detailed plans to hit the Capitol and the Pentagon. According to court documents, Ferdaus said such action "ought to terrorize...it ought to result in the downfall of this entire disgusting place."

Prosecutors said Ferdaus conducted surveillance on his targets in Washington and located a park which he planned to use to launch the planes of explosives. He also ordered one plane from a Florida company under a false name, gave his colleagues an order for C4 explosives and rented a storage facility to use to prepare the bombs and aircraft, officials said.

Ferdaus told the men he thought were al Qaeda members that he wanted to add a ground assault on the Pentagon to the plan and he requested fully automatic assault rifles and grenades.

Ferdaus was arrested September 28, 2011, after receiving explosives and guns at his storage facility. According to a press release from the U.S. Attorney's Office in Massachusetts, "the public was never in danger from the explosive devices, which were closely monitored" by the undercover FBI employees.

Prosecutors also said the undercover officers told Ferdaus more than two dozen times he could back out of the attack plan, but that he remained determined to go ahead.

First Assistant U.S. Attorney Jack Pirozzolo said Ferdaus' actions were "self-initiated, deliberate and dangerous." Pirozzolo went on to say, "He intended to unleash horrific acts of violence against the people of the United States both here and abroad."