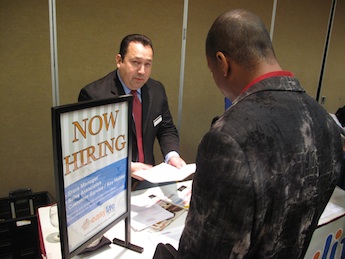 The October report is the first to feature ADP's new methodology aimed at further aligning its figures with the final monthly data released by the Bureau of Labor Statistics. The ADP report comes out a day before the government's official monthly job report, though it has not always been a great predictor of what the BLS report will say.

The revised ADP report now offers data on five categories of company size, ranging from small businesses with no more than 19 workers to large companies with at least 1,000 employees. It also breaks down employment in five industries -- construction; financial activities; manufacturing; professional and business services; and trade, transportation and utilities -- rather than three. Also, the sample size has been increased to 406,000 companies, from 344,000.

The government's report is a more expansive look at the national employment picture since it includes both public and private sector hiring. The former has been shedding jobs for the past two years.

Both reports take on enhanced importance this month since they provide the last look into the health of the job market before the presidential election.

The national unemployment rate stands at 7.8 percent, the lowest in nearly three years and the same rate as it was when President Obama took office.

Meanwhile, about 363,000 people filed for first-time unemployment benefits in the week ended October 27, down 9,000 from the previous week, the Labor Department said Thursday. That beat economists' estimates of 375,000.

About 3.3 million Americans continued to file for their second week of unemployment benefits in the week ended October 20, the most recent data available.