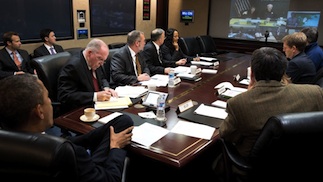 CNN) -- President Barack Obama, who canceled a number of campaign stops in critical battlegrounds this week, received updates through the night Monday into Tuesday on the massive storm that devastated many parts of the East Coast.

Later Tuesday Obama will hold a phone call with governors and mayors of all affected regions, the White House official said.

Overnight, Obama signed disaster declarations for the states of New York and New Jersey, allowing federal grants be used for repairing damage to homes, loans to cover property losses and other programs designed to help individuals and businesses recover from the storm.

Speaking Tuesday morning, Christie praised the response from the federal government, saying Obama had worked swiftly to ensure the disaster relief process wasn't held up. The New Jersey governor, a Republican and top surrogate for Romney, said the upcoming presidential election was not a topic of discussion when he was speaking with the president.

"I spoke to the president three times yesterday," Christie said on CNN's "Starting Point with Soledad O'Brien." "He has been incredibly supportive and helpful to our state and not once did he bring up the election. If he's not bringing it up, you can be sure that people in New Jersey are not worried about that primarily if one of the guys running isn't."

The logistics of voting, Christie said, would be sorted out by Election Day.

"Right now I'm much more concerned about preventing any other loss of life, getting people to safe places. Then we'll worry about the election. The election will take care of itself," Christie said.


CNN's Jessica Yellin and Kevin Liptak contributed to this report.