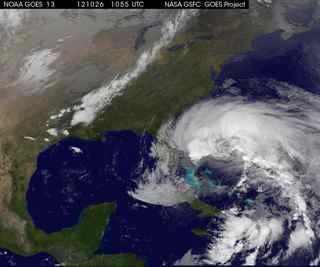 (CNN) -- Floridians have little to fear from Hurricane Sandy as the storm loses some force and begins veering away, but all the way up the Atlantic Coast, New Englanders are worrying about its fury as a combination of weather conditions threaten to turn it into a disaster for them as early as Monday.

Sandy's winds may have died down early Friday, but its system remains huge, and it is predicted to join with a winter storm front, turning into a "Frankenstorm," as the National Weather Service calls it, over the Northeastern United States, right around Halloween.

Sandy already left at least 21 dead as it ground over Haiti, Jamaica and Cuba.

It weakened to a Category 1 hurricane late Thursday and could drop down to a tropical storm before rolling onto land in the United States, said the weather service. But it warns the storm "could become a menace to the Northeast."


If predictions hold, Sandy would roll in over an already elevated tide, increasing its storm surge. It would dump lots of rain and deliver winds that are strong enough to knock over trees and power lines in a large region. And it would join with a second weather system currently over land to form a monster storm.

Meteorologist Kathy Orr at CNN affiliate KYW-TV in Philadelphia warned viewers Thursday that Sandy could be a storm "of historic proportion" and that the City of Brotherly Love could take a direct hit.

Landfall predictions show the storm striking somewhere between Washington and Boston, affecting some of the most densely populated areas of the country.

There is a 90 percent chance it will hit the American Northeast, said CNN meteorologist Pedram Javaheri, where $1 billion in damage could mount as it rolls inland, even affecting parts of the Midwest.

Residents in South Jersey have already begun stocking up on batteries and bottled water, and hardware stores have put up preparedness displays, KYW reported. One location quickly sold out of electric generators.

With a cloud field stretching over 1,600 miles, Sandy is massive, Javaheri said. That's about the distance from Memphis, Tennessee, to Los Angeles.

"Sandy should continue to expand in size," according to a National Weather Service advisory.

"From Sunday through Wednesday, winds of hurricane force are expected to lash exposed areas of the Northeast/Mid-Atlantic states, leading to potentially serious coastal erosion and coastal flooding," the weather service forecasts.

Even if it weakens to a tropical storm before a potential landfall, its initial winds could still be as high as 60 mph, toppling trees laden with leaves, which makes them heavier and more susceptible to gusts, according to KYW.

But wind damage is not the biggest concern.

With the load of moisture it is carrying, the storm is expected to dump 6 to 8 inches -- and maybe even 10 inches -- of rain in the hardest-hit coastal regions, KYW reported. It is expected to hit during a full moon when tides are at their peak, which could increase the storm surge.

The weather service also warns "the buildup of tides over multiple tidal cycles should exacerbate the situation."

Bulldozers shored up piers with mounds of sand in New Jersey, and people filled water and sand bags in preparation.

"We will be piling up as much sand as possible along the beachfront," said Frank Ricciotti, Margate, New Jersey, public works director. "I think the water damage is worse than another type of damage, and the hardest thing is to stop water, once it starts coming up."

As Sandy turns landward next week, it may be met by a winter storm front crawling to the east out of U.S. heartland, according to the weather service. They could collide and join, producing an even larger, stronger storm.

"This could be like the 'Perfect Storm' 21 years ago," CNN meteorologist Chad Meyers said of the potential damage.

A combination of three weather systems produced the famed "Perfect Storm" in the north Atlantic over Halloween 1991 when moisture flung north by Hurricane Grace combined with a high pressure system and a cold front, according to the weather service.

The current weather conditions are not duplicate circumstances of what produced the 1991 tempest. Although Grace contributed significantly to the storm, it did not progress to New England and did not make landfall, weather records show.

On Thursday, 11 people died when Sandy pummeled Cuba, according to state media.

More than 3,000 buildings were damaged in the country's east.

A man in Jamaica was killed when he was hit by a boulder sent tumbling downhill by the storm's rain, according to CNN affiliate TVJ.

Sandy has proved to be a windfall for surfers in Florida familiar with tamer tides. Even hundreds of miles away, the storm kicked up powerful surf off Fort Lauderdale, and boarders took to the waves despite warnings by authorities not to enter the water.

It is passing near the northwestern Bahamas and will continue fanning tropical storm conditions over Florida, said the National Weather Service, which predicts the storm will turn northeast, away from Florida, before curving back into New England.

After merging with the cold system, it is expect to "settle back toward the interior northeast through Halloween," dumping snow in some places, the weather service said.

The weather service gave the hybrid storm the "ghoulish nickname" Frankenstorm as "an allusion to Mary Shelley's Gothic creature of synthesized elements."