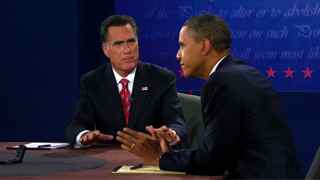 (CNN) -- Perhaps it only makes sense that a candidate who prepared for a presidential debate near Colonial Williamsburg would choose to slam Mitt Romney's plan for more Navy ships by using the phrase "horses and bayonets."

President Barack Obama's quip - meant to make the point that modern warfare doesn't require the type of equipment it did in the past - appeared part of a larger strategy of casting his opponent as stuck in a time warp on important issues. Republicans, seeing an opening, are making sure shipbuilders just down the road from President Barack Obama's Virginia prep location are aware of the president's suggestion their industry is a thing of the past.

Obama made the jab Monday at his final debate with Mitt Romney.


"You mentioned the Navy, for example, and that we have fewer ships than we did in 1916," Obama said in a pointed jab at the GOP nominee. "Well, Governor, we also have fewer horses and bayonets because the nature of our military's changed. We had these things called aircraft carriers where planes land on them. We have these ships that go underwater, nuclear submarines. So the question is not a game of battleship where we're counting ships. It's 'What are our capabilities?'"

That was in response to an allegation from Romney that "our Navy is smaller now than at any time since 1917."

"The Navy said they needed 313 ships to carry out their mission," the Republican candidate continued. "We're now at under 285. We're headed down to the low 200s if we go through a sequestration. That's unacceptable to me."

Romney was referring to the large cuts to the defense budget that would be triggered if a deal isn't reached on reducing the federal debt by the end of the year. His assertion that 313 ships are required for a fully operational Navy uses an outdated figure - Navy Secretary Ray Mabus dropped the number to 300 ships in April.

Mabus has also criticized Romney for his assessment of the Navy's strength compared to 1917, saying it's an outdated way of looking at American defense strategy.

"It's like comparing the telegraph to the smartphone. They're just not comparable," Mabus said in April, according to the Navy Times.

The "horses and bayonets" line was one of several attempts by the president to cast Romney as behind the times. Obama also pinned his GOP rival to the 1980s - "they're now calling to ask for their foreign policy back" - for his remark to CNN in March that Russia was the United States' number one geopolitical foe.

In stump speeches, Obama harks to another era for Romney's stance on reproductive rights, saying the candidate's position is "more suited to the 1950s than the 21st century."

And Obama hammers Romney for favoring a "trickle-down" economic approach, saying that method was a proven failure in the past.

Yet Republicans say Obama's lumping together of Navy ships with "horses and bayonets" could harm him in the key battleground of Virginia, where some of the Navy's largest shipbuilding and repair operations are based. Obama and Romney have both been battling fiercely for votes in the southeastern part of the state, where communities in Newport News, Norfolk and Portsmouth are largely sustained by Navy operations.

Republicans immediately latched onto the comment on Twitter, saying it showed Obama would be open to cutting military jobs in the commonwealth.

@EricCantor: Mr. President, for the thousands of Virginians in the Navy family, cutting our naval forces isn't a game of battleship.

@EWErickson: I'm #ProudofObama for treating the Navy so dismissively. That only helps Romney in Virginia, Florida, etc.

"President Obama's dismissive comments about the Navy tonight should be concerning for any voter who cares about the safety and security of Americans at home and abroad," Virginia Gov. Bob McDonnell, a Republican, said in a statement distributed by Romney's campaign. "President Obama has not only ignored these concerns - but his flippant comment about 'horses and bayonets' was an insult to every sailor who has put his or her life on the line for our country."