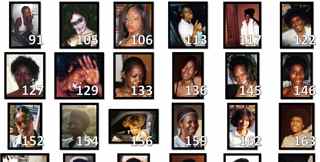 (CNN) -- Los Angeles police have posted the images of 42 women culled from the photo collection of the "Grim Sleeper" serial murder suspect on social media and their website, officials announced Thursday.

The photographs were taken between 1976 and 2010, and the women in them have yet to be identified, police said in a news release.

If anyone recognizes one of the women, they can use Twitter or Facebook to make a positive identification. The number to make an anonymous tip is 800-222-8477.

Lonnie David Franklin Jr., who was arrested in July 2010, is accused of killing women ranging from ages 14 to 36 between August 1985 and January 2007. Many of the victims were prostitutes, authorities have said in the past.

Most of the sleeper's victims were discovered dumped in south Los Angeles alleys and covered with debris, authorities said. All victims were shot; some were strangled too, an indictment alleges.

Authorities widened their inquiry to include all homicides that occurred in a general area of south Los Angeles where Franklin lived from the 1970s, when he got out of the military, through the 1980s, police spokeswoman Karen Rayner said in August 2011.

That amounts to about 230 murders, and even some that officials thought had been solved, she said.

Franklin, 59, has pleaded not guilty to 10 charges of murder and one of attempted murder.

Prosecutors said they will seek the death penalty against Franklin.

Before his arrest, Franklin had worked for a time as a garage attendant at a Los Angeles police station, authorities said.

The killer was nicknamed the Grim Sleeper because he seemed to take long breaks between homicides, police said.