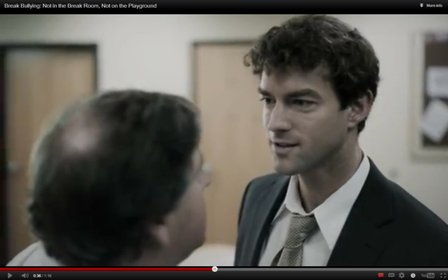 (CNN) -- It's an anti-bullying message designed to hit home with a different audience - adults. And it hits hard.

The set is an office breakroom. The office bully calls a coworker names, then pushes and threatens him, even as horrified colleagues pretend not to notice. One gets up from his table and scurries away. The victim is humiliated. The bully revels in the power.

In the end, the boss intervenes, but not to bring justice - just to tell the bully and the victim to "get back to work."

Anyone who watches the public service announcement, "Break Bullying," would see no office would allow the scene to play out that way. In reality, it didn't: It was based on actual experiences from the producer's middle school years.

And that's the point, according to the organization Not in Our School and Mike Nelson, the producer of the spot: If we wouldn't stand for bullying as adults, why do we allow it to happen in our schools?

When Nelson's boss at ad agency MAKE told him to do a piece on bullying, he jumped at it. Nelson was bullied in middle school and fell back on that experience to create a story that would resonate with adults who saw it.

He decided to use real images and real language. Even "bleeped out," the expletives are obvious and stinging. Nelson says that's the reality of bullying.

"This is how it happens," he told CNN.

The Not in Our School program focuses on what adults can do to help kids address bullying and make schools safe for everyone. Its site offers a guide to start a Not in Our School campaign as well as a video kit and links to anti-bully supports. It also features anti-bullying lesson plans for elementary, middle and high school classrooms.

Nelson's anti-bullying message had a strong impact on Cohn-Vargas. An educator and daughter of a family that escaped the Holocaust, she notes, "Many adults have taken action from personal experience."

Now that he's an adult, Nelson said, he's taking his own action against bullying.

"I basically played out my own experience in school," he said. "I wrote that exactly as it was.

"That hurtful behavior sticks with kids for the rest of their lives."