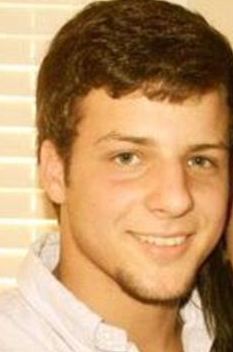 (CNN) -- The shooting of an unarmed and naked Alabama university student killed in a late-night confrontation with a campus police officer appears to be unjustified, the lawyer for the young man's family said Thursday.

Part of the brief incident Saturday night that led to the death of 19-year-old Gilbert Thomas Collar of Wetumpka, Alabama, was captured on a surveillance camera outside the University of South Alabama police station.

The video has not yet been viewed by reporters or the public, but the Collar family's attorney, Jere Beasley, said, "There is nothing on the surveillance tape that justifies the use of deadly force."

Mobile County Sheriff Sam Cochran said Tuesday that Collar, naked, sweating profusely and acting erratically, showed up at the police station and began banging on the door and window.

An officer came out, his handgun drawn, and started issuing orders to Collar while retreating backward across the back patio of the building, according to Cochran.

After retreating for more than 100 feet, according to Cochran, the officer fired when Collar drew within five feet of him. Collar, struck once in the chest, collapsed and died at the scene. The incident unfolded over no more than 20 or 30 seconds, Beasley said.

The officer had access to both pepper spray and a baton, Beasley said, but he noted that campus police are apparently not certified to use stun guns.

"Had either a stun gun, baton or pepper spray been used in this case, we wouldn't be here today," he said.

Both Beasley and sheriff's investigators believe someone gave a substance to Collar that led to his erratic behavior. At Tuesday's news conference, Cochran said witnesses told police someone had given Collar LSD sometime during the night.

Beasley said it would be irresponsible to say Collar was on drugs until toxicology results are completed, which could take several weeks. He also said he doubted witness statements to police that Collar attacked occupants of two cars before reaching the police station.

Cochran said Tuesday that a witness interviewed by police took a picture of Collar against the side of one car.

"One victim had advised that he had grabbed her arm and was trying to bite her on the arm and making weird noises and statements towards this victim," he said.

Mask did not immediately return a call seeking comment.

The death has, of course, been hard on Collar's family, Beasley said. But he added they have forgiven the officer who fired the fatal shot, and are praying for him.

The family will wait for the results of investigations before deciding whether to file a lawsuit against the school, Beasley said.

"The goal of the parents is to make sure that this does not happen again to any other student under like or similar circumstances," he said.