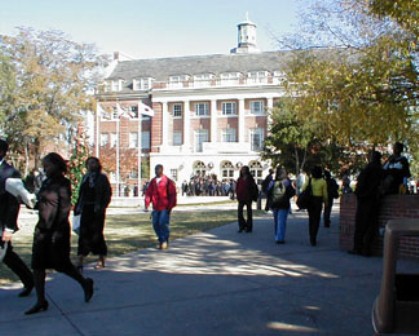 (CNN) -- The Supreme Court on Wednesday will hear oral arguments in an important affirmative-action case -- whether the University of Texas' race-conscious admissions policy violates the rights of some white applicants.

The justices will decide whether and when skin color and ethnicity can be used to create a diverse college campus. CNN gathered comments from three current or former students with a direct interest in the case. Their comments have been edited for clarity and brevity.

Fisher was denied admission to the state's flagship university and filed a lawsuit challenging the selection process. She graduated this year from Louisiana State University, and issued a statement of her views, through her legal team.

FISHER: "I dreamt of going to UT (the University of Texas) ever since the second grade. My dad went there, my sister went there, and tons of friends and family. And it was a tradition I wanted to continue.

"There were people in my (high school) class with lower grades who weren't in all the activities I was in, who were being accepted into UT. And the only difference between us was the color of our skin. I took a ton of AP (advanced placement) classes, I studied hard and did my homework, and I made the honor roll. I was in extracurricular activities -- I played the cello, I was in math club, and I volunteered. I put in the work I thought was necessary to get into UT.

"I was taught from the time I was a little girl that any kind of discrimination was wrong. And for an institution of higher learning to act this way makes no sense to me. What kind of example does this set for others? A good start to stopping discrimination would be getting rid of the boxes on applications -- male, female, race, whatever. Those don't tell admissions people what type of student you are, or how involved you are. All they do is put you into a box, a theoretical box.

"I didn't do this for recognition. I just want to stand up and say this isn't right, because it isn't. I hope that by doing this other students in years to come won't have to worry about the color of their skin when applying to college. If people say anything about me, I hope they say I didn't take this sitting down. I didn't accept the process, because the process is wrong."

Rodarte graduated seventh in her El Paso high school class of around 350. For her, that meant automatic acceptance to the university, which has a race-neutral policy for almost all in-state high schoolers finishing in the top 10% of their class. For applicants outside that pool, race is one of several factors considered in the discretionary admissions process, and it is that policy being challenged at the high court. Rodarte spoke with CNN on campus.

RODARTE: "It is really unfortunate for someone to say that the only reason someone got into UT was because of their race. It really undermines the hard work ... these students of color like Latinos or African-Americans put into applying to come here to UT. I personally worked really hard in high school to ensure that I got into a top university with scholarships. To hear people saying that some of us Latinos got in here easily, and the only reason we got in here was because of our race, that's really disappointing. We worked just as hard as anyone else did to get here to UT.

"I applied to the University of Texas because I felt that it was one of the top-tier universities here in Texas. I felt that it gave a lot of opportunities to students to come and purse their education here, and I felt that the values of the University of Texas matched up with my own. The reason that I actually came to UT was because they offered me a scholarship, and coming from a humbled background the financial issue of college was a big deal. To have that support from UT and to have that scholarship was one of my biggest components and decision to come here.

"For me diversity is very important here on campus because it's important to see the different views and opinions of people from different backgrounds. So far, I feel that UT is doing a great job recruiting diverse student body. Currently the number of Latinos has increased from years before.

"I think that if UT didn't consider race as one of its holistic components, then we would have less representation, and that would inhibit the university from the potential it has to compete at a global spectrum because I feel that if UT didn't have the diversity, and didn't consider race one of the many factors to which they accept people, we wouldn't be one of the top 25 ranked universities like we were ranked recently. I feel that UT's ability to provide that diversity makes it a global competitor as a university.

"It's completely erroneous to say you didn't get accepted to a university based on race, because here at UT race isn't the only factor that goes into consideration at the admissions office. I feel that UT's admission process is completely constitutional, and it recruits high-caliber students not only from one background or homogenous population, but from diverse and well-rounded people."

Bradley Poole, University of Texas at Austin junior and president of the Black Student Alliance

The school's Black Student Alliance filed a so-called amicus brief with the high court, supporting UT's admissions policy. The brief was put together with the help of the NAACP's Legal Defense and Educational Fund. Poole spoke with CNN on campus.

POOLE: "The admission process for me was rather simple. I was in the top 10 (percent) of my class. However my school was 76% African-American, but where I'm from is generally a diverse area. I'm from Killeen, Texas, which is the sister city to Fort Hood, the largest military installation in the free world. There are people from all walks of life in Killeen, brought there by the military, so I did have a diverse background. So even if I weren't in the top 10%, I felt that UT would have taken that into consideration, especially my community involvement.

"I think it's important for everyone to have an equal chance so that is why the top 10% plan is set into place. There are things that need to supplement the top 10% plan, like a holistic review. One of those factors of a factor of a factor is race. I think it's important to stress diversity for this university, seeing how we are 50,000-plus students, and how we are not only the university that sets the standard for the state but for the region. I think it's important for us to stress diversity not only amongst each other, but in the fact that we are educating each other and there are professors who educate us. It's important to learn from your environment as well, especially in the fragile years of college.

"I think there were other factors that kept Abigail Fisher from being admitted. Race may play a factor into your admittance into UT, but it is a factor of a factor of a factor -- race is a factor of the whole holistic process. So if you weren't admitted into the university based on the top 10% plan, there is still hope for those not admitted under that plan to show their community engagement, to see what shaped your lives, and your views on your surroundings and things like that. And race is factor because there are signifiers of race that determine your personality and how others view you. To anyone who believes race was a detriment to them, any white student or any minority student who felt their race was a detriment to them getting into the university, they need to take into account they may have helped another student learn for their professional life.