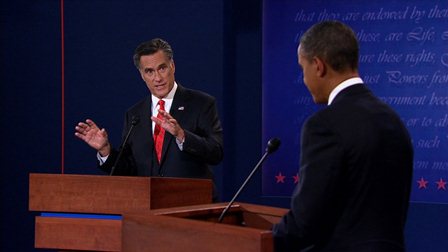 (CNN) -- No issue has been hotter throughout the run-up to the election than jobs -- and both candidates took pains to tackle the issue during their first debate Wednesday at the University of Denver.

In 2009, Obama's first full year in office, people in states across the country were losing their jobs at a startling clip. In Ohio, the unemployment rate was 10.6 percent.

But over the next few years, the nation saw slow increases in employment in the retail, education and health care sectors. Today, most states are gaining jobs. The key swing state of Ohio now has a 7.2 percent unemployment rate.

The Bureau of Labor Statistics confirms that a lot of jobs have been created under Obama's leadership -- 4.4 million by the bureau's latest count. What Obama did not say, however, was that the nation shed 4.3 million jobs during the early days of his term, and that the net gain since he took the oath of office in January 2009 is just 125,000 jobs.

Many voters blame that initial weakness on the fractured economy Obama inherited from his Republican predecessor, former President George W. Bush. But in terms of sheer numbers, Obama's assertion that he created 5 million jobs does not tell the whole story and is therefore false.

Also during the debate, GOP presidential candidate Mitt Romney said that 23 million people are out of work in the nation.

"There is suffering in this country," said Romney. "And we talk about evidence. Look at the evidence of the last four years. It's absolutely extraordinary. We've got 23 million people out of work."

When the recession began, workers in every category lost jobs, but those in the middle and higher wage groups lost more of them.

And when the jobs started coming back, the lower-wage jobs came back stronger. That means that, while the nation has replaced lost jobs, many of those new jobs pay less than the old ones did.

To reach his 23 million figure, Romney counts everyone who is unemployed, has stopped looking for work or is underemployed -- working for less money than before or able to find only a part-time job.

Romney is stretching his figures to the breaking point -- which makes his claim false.

What it all means:

If history is any guide, the employment figures could prove key in this race. In August, the U.S. unemployment rate was 8.1 percent, according to the Bureau of Labor Statistics. No president has been re-elected with an unemployment rate above 8 percent since Franklin Roosevelt in the 1930s, during the Great Depression.